CLASSIC DOCTOR WHO ON BRITBOX – Planet of Giants 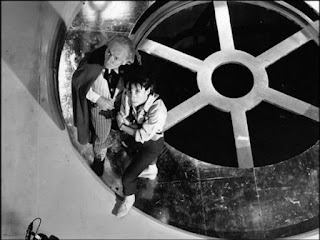 On 26th December 2019, 627 pieces of Classic Doctor Who content were made available to Britbox subscribers. Every Sunday in 2020, our Doctor Who expert, Tony Cross, looks back at some of the classic stories. Here is the First Doctor adventure Planet of Giants…

Planet of Giants is an odd story. It was originally planned to be four episodes long but got cut down to three at the insistence of Verity Lambert who felt it was dull. Having watched the reconstruction - on the DVD - of episodes 3 and 4 I can only conclude that Verity Lambert was spot on. However, this is a review of what went out not what might have been.

As the TARDIS is about to materialise the doors open. This sets the Doctor into a tizzy but seems to have done no real damage until after a bit of exploring the TARDIS crew realise that they've been shrunk. They're only an inch high (and will turn out to be Private Eyes too*). An ordinary English garden becomes a series of potential death traps. Except something is wrong. Everything in the garden is far from lovely. Every living thing they come across seems to be dead or dying. And that includes the man whose corpse lies across the path.

That corpse belongs to poor Farrow (Frank Crawshaw). Farrow was the man from the ministry (of Agriculture I'm going to assume) who was writing a report on DN6. DN6 is a new insecticide. It's the brainchild of Smithers (Reginald Barrett) bankrolled - to a risky degree - by Forester (Alan Tilvern). Farrow's worked out that DN6 is lethal to pretty much everything fauna, which means the good as well as the bad. Its world ending stuff. Forester has committed too much to the project and has killed Farrow. Now he and Smithers must cover it up.

The TARDIS crew are dragged into this when - in order to hide from a cat - they dash about and Ian and Barbara end up hiding in a briefcase.

The rest of the story is spent watching the miniaturised TARDIS crew investigating, plotting and then organising - indirectly to be honest - the arrest of Forester and Smithers. They're helped in this by the curiosity - or nose poking - of local operator Hilda (Rosemary Johnson) and slightly less curious Policeman Bert.

Oh and they're helped by Forester's stupidity. He tries the handkerchief over the phone trick to pretend to be Farrow, which Hilda sees right through. That makes her suspicious. She pokes Fred until he's willing to act and he walks in just as Smiths and Forester have been 'distracted' by the TARDIS crew creating a small bomb.

It should be noted that Barbara touches some DN6, which is slowly killing her. She manages to hide this fact for a while despite behaving very oddly. Both Ian and the Doctor notice the oddity but fail to act on it. It's only when Barbara passes out that the truth comes out. Fortunately, at the end of the story everyone is returned to their normal size, which makes Barbara's dosage of DN6 less than lethal.

It looks magnificent. The work that has gone into the sets - sink, telephone, briefcase and matchbox etc - really makes it look like everyone has shrunk. The threat of surprisingly ordinary things such as cats and water-filled sinks is part of the fun of this story. As is watching the TARDIS crew work out how to escape and how to stop Forester.

They never know his name of course. They never interact directly with the villain. The story emphasises how the difference in scale means that they are incomprehensible to each other. This isn't a whodunnit as we see Forester carry out his dirty deed but more of a 'how can we stop him getting away with it'.

It's hard to say much else about this really. The cast do a fine job. Susan is mostly OK, Barbara is plucky and brave, Ian is brave and steadfast, and the Doctor is clever and grumpy. The interesting thing in this story is that the TARDIS crew decide to stay and stop the DN6 problem, even though Barbara is sick. They feel it is their duty. It's a nudge towards how we see the Doctor and his team now.

It's not a bad story. It's not particularly exciting and, as I said in the intro, watching the extended 'restoration' just confirms that at four parts it would have been as dull as ditch water. There's a lot of handkerchief action though. If you like that sort of thing.

Worth it for the great sets and props, including 'giant ants'.**

*Inch High Private Eye was a Hanna-Barbera cartoon from the 1970s. Take a look at this intro here

**On that score you ain't seen nothing yet. There's Zarbi a-comin'