Classic Doctor Who on BritBox - An Unearthly Child 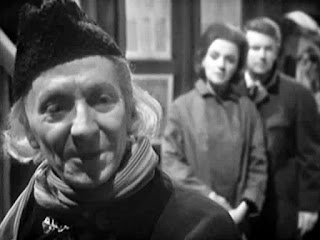 On 26th December 2019, 627 pieces of Classic Doctor Who content were made available to Britbox subscribers. Every Sunday in 2020, our Doctor Who expert, Tony Cross, looks back at some of the classic stories. Here is the First Doctor adventure An Unearthly Child...

The traditional thing when reviewing An Unearthly Child is to concentrate on the brilliance of the first episode and then point out how disappointing the three caveman episodes that follow are. I don't intend to do that for two reasons: firstly there isn't really much I can say about the first episode that hasn't already been said better by other more brilliant people than I; secondly because I'd like to talk about the three episodes in more detail.

Episode one must be one of the most analysed twenty-five minutes in television drama. Its creation has been discussed both in fact and fiction. There's even an hour and a half television movies that revolves around the creation of Doctor Who. This is more than just television now. It's a cultural icon. And it is brilliant. I must have watched it a dozen times and it never feels tired. It's possibly one of the finest first episodes of any television series ever made. Its title sequence & music are radical and wonderful. The Doctor is edgy and alien in a way we're not used to.

And that's all I'm going to say about it.

The following three episodes are far better than you'd believe from the fan gestalt. The key is that everyone plays it absolutely straight.

It's a political thriller. The West Wing in skins - although I'm not going to pretend the dialogue is of equal standard. There's an element of Macbeth* about it too, as Hur (Aleathea Charlton) gives Za (Derek Newark) the oomph he needs to act. Za wasn't going to go into the darkness after the travellers, but Hur gave him the push to do so. Hur clearly doesn't want to be partner to anyone but Za.

It's about power. The secret of making fire is what makes a man the leader of his tribe. Za's father used to have the secret, but died without passing it on. Kal (Jeremy Young) is Za's rival. A wanderer from another tribe who wasn't killed but accepted. When Kal sees the Doctor light his pipe he thinks he's got one up on Za. This is Kal's chance to take the throne. He thinks he's got his own pet fire maker.

Alas it doesn't turn out to be that simple. The Doctor's lack of matches means he can't make fire there and then, which gives Za his chance to undermine Kal. Then there's the Old Mother (Eileen Way) who fears fire. Fears that the strangers will bring them fire and sets out to make things more complicated for everyone. Eileen Way is excellent. As are Aleathea Charlton, Derek Newark and Jeremy Young. Whatever they feel about throwing themselves about on flea infested sand in furs as people they don't let it spoil their acting. All of them take it very seriously. All of them play it straight. None of them are over-the-top, which would have been the easiest thing to do in the circumstances. These three episodes work because everyone in the cast is doing their damnedest to put in good performances.

I should stop here for a moment and make some comments about the cast. Firstly Hartnell's portrayal of the Doctor is very different to The Doctor that we have come to know and love. This is a colder and darker Doctor. He kidnaps Ian and Barbara to protect Susan. He sulks when Ian takes control of events. Notoriously he looks like he's about to pick up a rock and kill Za when the opportunity to escape is slipping from their grasp thanks to Barbara's decision to go help the wounded caveman. Ian stops him. The Doctor is shifty, angry and alien. More alien than The Doctor will ever be again really. I like Hartnell's performance but I can see why it is a bit of a culture shock to people coming to him from New Doctor Who. This isn't a cuddly avuncular Doctor. This is a strange time-traveller with his baffling machine that is bigger on the inside.

Ian clashes most with the Doctor. He's most in denial initial when they stumble into the TARDIS, perhaps because it basically takes his science teaching and laughs in his face. If the TARDIS is real then Ian's whole world view is about to take a big kicking. He's still in denial until they step outside onto an alien world.** It is Ian that makes fire. It is Ian that tells Za that 'the whole tribe is stronger than Kal.' and perhaps introduces an element of communism into the previously individualistic caveman world. Indeed this whole story is a left-wing parable about sharing power, after all in Ian's tribe the fire maker is the least important member of the tribe because 'everyone knows how to make fire.'

Barbara seems to take things in her stride initially but is gradually pushed over the edge by events and then comes out of the other side but even allowing for her propensity to falling over in this story - she does it twice*** - there's a moral strength to Barbara that in this story particularly makes her the conscience of the TARDIS team. It is Barbara that decides to ruin their escape plan and help the injured Za.

Both William Russell and Jacqueline Hill put in fine performances and I'm always disappointed that Barbara and Ian don't feature higher up on lists of favourite companions. They're a great team.

Carole Ann Ford's Susan is the character that gets the weirdest jump between the first episode and the following three. She's strange, quiet and still in the first episode and then turns into a flapping child when the Doctor disappears at the beginning of the second episode. But it is Susan who comes up with the idea of the flaming skulls. Everyone in the team gets to contribute.

So these first four episodes are one fantastic piece of television followed by three pretty good ones. It's a fine story this - even if it is an artificial divide as the end of the fourth episode leads us straight into the Daleks without a break.

It's well-directed by Waris Hussein. It's surprisingly violent, including a long fight sequence that ends rather horribly even if we don't get to see the final killing blow.

The other thing to note is there is real suspense here. No one knows - at this point - whether everyone will survive. There's a real sense of fear. And everyone ends up dirty and sweaty. It feels surprisingly real. Yes, running around pre-historic forests is a dirty old business. It's not always going to seem like that in the future of the programme. For now though his is real, dirty and dark.

* Yes, I know. But if I can't make pretentious comparisons in my own article where can I.

** Generally this is assumed to be pre-historic Earth but there's no official confirmation that it is at any point. This could be pre-history on any planet with a single sun. Maybe it is Mondas.

*** Interest to note that her second fall - whilst there fleeing the cavemen - the Doctor runs right past her. It's Ian that picks her up. More evidence of the Doctor's less than Doctor-ish nature here.