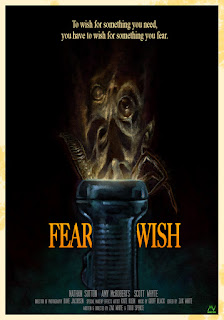 Be careful what you wish for... Nate McKenzie watched the short film Fear Wish, written and directed by Zak White and Todd Spence...

With their new short, Fear Wish, Zak White and Todd Spence present an innovative concept in horror storytelling and do so in a matter of minutes.

Three clicks, two steps, one wish, Then… the fear.

What horror would you be willing to face to be granted a single desire? In Fear Wish, that’s precisely the dilemma that Rich (Nathan Sutton) faces, as he’s guided through the necessary steps by the voice of his friend, Mike (Scott Whyte). In three minutes, White and Spence are able to instantly slice through your self-preservation with the steady hum of a an electric razor-blade while redefining the phrase, “Wish in one hand, shit in the other.” With the possibility of the latter being wholly involuntary.

Fear Wish indulges a lust for horror without fully satisfying, leaving you with the right amount of questions and a craving for more. You’ll wish to see the rest, but the question is – what are you willing to face to fulfil that desire?

Now you can watch the full short film for yourselves below. Just keep a flashlight handy...