CLASSIC DOCTOR WHO ON BRITBOX – The Celestial Toymaker 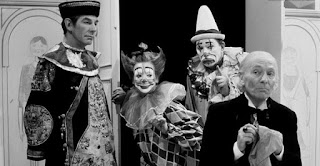 On 26th December 2019, 627 pieces of Classic Doctor Who content were made available to Britbox subscribers. Every Sunday in 2020, our Doctor Who expert, Tony Cross, looks back at some of the classic stories. Here is the First Doctor adventure The Celestial Toymaker...

Fan consensus is a funny thing. Once upon a long time ago The Celestial Toymaker was regarded as something of a Doctor Who Classic but now - and with accusations of racism* hung about its neck - it is somewhat unloved.

The truth is I think this is a story that needs to exist in visual form to judge it properly. Its missing episodes hint at a weird and creepy tone - like The Mind Robber but without the laughs - but fundamentally nothing much actually happens. No one in this story really gets to do anything. Steven and Dodo play games against a series of odd opponents but even though there is supposed to be a threat here it never feels that threatening. The Celestial Toymaker could feel terrifying and the idea that losing to the Toymaker gets you turned into a toy for him to use in his new games is the stuff of genuine horror but is always danced around and never quite properly considered.

But the final episode, which is the one that survives, is lacking in any kind of real tension at all. Everyone is playing games. Everyone is going through the motions. Even Cyril (Peter Stephens) the Billy Bunter rip-off is more a petty annoyance than a ruthless villain.

And there's so much stupidity going on in this story. Cyril effectively stupids himself to death. Dodo is constantly doing things that are utterly dumb.

It also looks very studio-y in the final episode. And small studio-y too.

But actually that's not the reason I dislike this story. I dislike this story because it's an insult to William Hartnell. I'm not sure by this point how difficult Hartnell was but this story - like The Massacre - effectively writes the Doctor out of things for whole episodes. He's reduced to invisibility and then silence. I've heard that they considered writing out Hartnell in this story so obviously the production team, headed up by Innes Lloyd. had had enough but it just seems damn rude to treat the star of your show like this.

It wouldn't matter so much if the Steven and Dodo had an interesting story (or acted in an interesting way) but they're just not well-used. Even Peter Purves struggles here. And poor Jackie Lane is given a character with the brains of a goldfish. Creepy atmosphere on its own does not a good story make. You need something at the core of it and this has...nothing.

There's potential here. Potential for something truly dark and surreal but in the end it’s just a series of dull set pieces revolving around games that no one wants to play. The Doctor and The Toymaker have met before in some unseen adventure and there's a fascination about what the Toymaker is, which is explored in other media.

I have also glossed over the racial aspects of this story (or reduced them to a footnote below.) Philip Sandifer puts the case across far better than I could but once you start to have an awareness of the problems with this story then it becomes less likeable. I'll admit I watched the surviving episode the first couple of times without noticing the problems but now it is hard not to see that this story has issues. And they're not good ones.

So I'm afraid The Celestial Toymaker doesn't do it for me. It's never quite lives up to its potential but as I said I think to judge it properly and fairly you'd need to see the whole thing. Based on three audio episodes and the one surviving video episode it'll be a while before I bother to watch this again. As Dodo herself says, "...this is really a very sad place,"

I'd be interested to hear anyone defend this story so feel free to add to the comments below.

*Read Philip Sandifer's blog The Most Totally Closed Mind for a genuinely angry and interesting take on the story's issues with race. I think I didn't see it quite as clear cut as he does but there's certainly something not quite right here and the use of the unacceptable or Top Gear version of Eenie-Meenie-Miney-Moe is edited out of the BBC CD version of the story isn't a good sign. As Sandifer points out by 1966, we were already aware that it was unacceptable. Using it seems to indicate that the people making this didn't care, which isn't good.