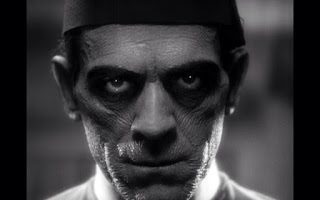 Daniel White dug through his vast horror film collection and is now rewatching a box set of classic monster movies from Universal. For his next Universal Monster of the Week, he looks back at The Mummy...

Back in 1932, decades before Brendan Fraser's brilliantly anarchic performance, there was Karloff. Fresh from his success as The Monster in Frankenstein, Karloff turns in astonishing performance in the titular role. The story of Imhotep and his search for his long dead forbidden Princess seems all too familiar now but back then it was all new. Inspired by the discovery Tutankhamen's tomb 10 years earlier, producer Carl Laemmle Jr sought to find a novel to base an Egyptian horror story on. When he found nothing he commissioned a new story and, although it is similar to an Arthur Conan Doyle short story (The Ring of Thoth) it seems to have become the basis of every "The Mummy" film ever since.

What is consistent throughout the Universal Monster films is a really effective atmosphere, something that is so often missing in modern horror films. All too often there is an over reliance on CGI and attention grabbing special effects which do not make up for the lack of tangible fear and dread that the older movies are draped with. What also makes The Mummy truly memorable is a cohesive story line that doesnt just revolve around the monster awakening and a curse, although they are both present. Imhotep is brought back from the not dead and then waits for 10 years before shuffling into action. The concept of disguising his decomposing body with a fake persona and make up is so effective it is still striking now. Karloff is both sinister and tragic in his portrayal of a long dead Prince who just wants to find his lost love. When he is eventually turned to dust the sense of tragedy is effectively portrayed and there is a real dimension and understanding in the performance that is often ignored in more modern retellings. 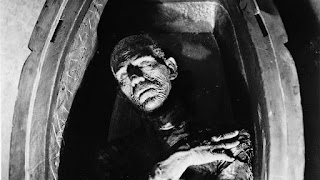 The recent Tom Cruise Mummy film was a complete mess, it relied far too much on set pieces and paid scant attention to storytelling or even effective characterisation. Even more worrying is the lack of engagement that the audience feel with the main characters and this leads to a film where you just don't care what is happening or how the film ends. In direct contrast, the 1932 version is a film that causes you to care intensely about both Imhotep and Helen (the object of his amorous affection.) Even when Helen calls on the Godly assistance of Isis and remembers her ancestral past it is portrayed in such a way that the pacing and story line are not disrupted at all. Karloff brings to life the violent obsession and tragedy of Imhotep in a way that ensures audiences are not left behind.

Unlike other Universal Monster films, The Mummy has no direct sequels but it has been "re-imagined" on countless occasions with varying degrees of box office success. Karloff has a habit of making his portrayal of monstrous creations the definitive one and his Imhotep will always be the one to aspire to. Arnold Vosloo's portrayal in the 1999 owes a great deal to Karloff's work. Without the 1932, and some may regard it as the original, Mummy film there would be no template to work with and no standard to attempt to reach. Karloff cut a trail blazing path both with his dedication and his performance and his work has stood the test of many decades.