CLASSIC DOCTOR WHO ON BRITBOX – The Time Meddler 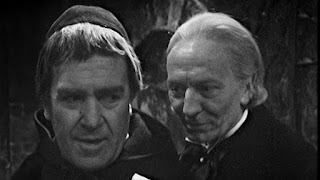 On 26th December 2019, 627 pieces of Classic Doctor Who content were made available to Britbox subscribers. Every Sunday in 2020, our Doctor Who expert, Tony Cross, looks back at some of the classic stories. Here is the First Doctor adventure The Time Meddler...

The Time Meddler is the final story of the second series of Doctor Who. Broadcast between the 3rd and 24th July 1965 it sees the full debut of Steven Taylor (Peter Purves) as a member of the TARDIS crew. It's not quite clear how he made it aboard but somehow, before the TARDIS dematerialised, Steven and Hi-Fi managed to get in, past Vicki and the Doctor.

Steven's a little cynical about the TARDIS to begin with. Refusing to believe it is a time machine, even whilst confessing it is 'a little unusual'. Hartnell's interaction with Steven is refreshingly sarcastic. The little speech that ends "...that is a chair with a panda on it. Sheer poetry dear boy." is a lovely bit of stuff from Hartnell. Hartnell's pretty good throughout this story actually bouncing off the various guest actors well, particularly Peter Butterworth's Monk. Although he blatantly gets a week off as in episode two, we only hear the First Doctor, but we never see him.

The TARDIS appears to have landed in 10th century Britain, although Steven remains cynical. Particular when, after the Doctor conveniently arranges splitting up his party, he finds a wristwatch on the floor. How can you get a wristwatch in 10th century Britain? And who is the mysterious Monk watching from the clifftop and then lurking about in a comically sinister manner.

This story gets two mightily fine cliff-hangers. The first is at the end of episode one when the Doctor reveals the phonograph & gets captured. There are modern appliances here. In 11th century Britain. And the Monk seems to be in charge of them.

It becomes clear that the Monk is up to no good over the course of the story and that he is some kind of time traveller, perhaps one known to - or who knows of - The Doctor. It is the cliff-hanger to Episode Three that is the best though. When Vicki and Steven enter a sarcophagus and find themselves aboard another TARDIS. Not only is the Monk a time-traveller. He has a TARDIS. This Monk is from the Doctor's home. A home that is still unnamed here. Nor are his race named. But still that moment when they step aboard another TARDIS opens whole new vistas for the series and - perhaps? - takes the first little chip out of the question mark in Doctor Who?

The Monk is trying to change history. He seems to have a history of minor temporal crimes. Stealing art here. Playing little tricks there. Stirring the pot without trying to destroy the universe. In that sense The Monk is no prototype Master. He's more the Doctor himself let off the leash. His plan in this story, which we shouldn't forget would involve the mass murder of Vikings, sounds like the biggest thing he's ever attempted. The first step in a plan designed to advance Earth history so that Hamlet can be written by Shakespeare for television not the stage. Although I think there's more to it than that. The Doctor calls him a 'Time Meddler', almost as if that is actually the title of a particular type of criminal from his home planet.

Peter Butterworth is excellent as The Monk. He's perfectly cast for mischief rather than nastiness. With The Master/Missy dominating the Doctor Who bad Time Lord list in New Doctor Who you do wonder whether the series could find a place for the (Meddling) Monk now. After all The Doctor is more like the (Meddling) Monk now than he was in Hartnell's day. Big Finish have bought him back, played by Graeme Garden, and I recommend you give them a listen if you get a moment. But alas I suspect the (Meddling) Monk has gone along with The Rani drowned in the Master/Missy shadow. But I digress.

The odd thing about this story is its tone. It is mainly pretty comedic but there's violence here. And then there's the rape of Edith (Aletha Charlton). Yes, the rape doesn't happen on screen. Obviously. But that is what is implied both just before and afterwards. It's all a bit Game of Thrones. As if we need to establish that we're in a dark past by showing the horror that lurked there in England's green and pleasant land. It's really strangely out of place in the story, particularly as Aletha Charlton and Michael Miller, playing her husband Wulnoth play it really straight. When we see Edith afterwards for the first time she is in genuine shock, although this being Doctor Who she seems to recover from her ordeal pretty quickly. It should be noted though that she is keen to be part of hunting down and killing the Vikings that did this too her.

The Vikings in this story have horned helmets. So, I'm saying horned helmets for Viking is historically accurate in the Doctor Who universe, modern historical belief be damned. This is Doctor Who. When the legend becomes fact. Show the legend.* Except the two Vikings -Ulf (Norman Hartley) and Sven (Donald Anderson - are a particularly cowardly pair by Viking standards.

Vicki and Steven get stuck together for most of the story and there's some nice material for Maureen O'Brien and Peter Purves to play off. It's a good first story for Purves but I do miss Ian and Barbara.

Hartnell is wonderful in this too. It's one of the best stories of the Hartnell era. You could definitely drop this in for people to watch who aren't fans and they'd probably enjoy it, despite the Edith issue so if you haven't watched it yet give it a go.

*To bend a quote from The Man Who Shot Liberty Valance