CLASSIC DOCTOR WHO ON BRITBOX – Galaxy 4 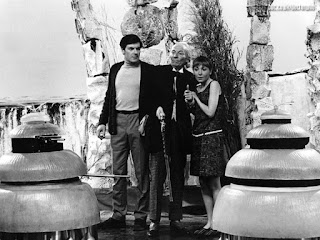 On 26th December 2019, 627 pieces of Classic Doctor Who content were made available to Britbox subscribers. Every Sunday in 2020, our Doctor Who expert, Tony Cross, looks back at some of the classic stories. Here is the First Doctor adventure Galaxy 4...

Galaxy 4, directed by Derek Martinus and written by William Emms, is a thing of averageness. Its plot is pretty straightforward.

The TARDIS lands on a planet that - it turns out - is dying. On that planet are two crashed ships. Aboard one is the Drahvins, led by Maaga (Stephanie Bidmead), a race of warrior women. On the other are the Rills, accompanied by their cute metallic servants named 'Chumblies' by Vicki. The Drahvins and Rills are at loggerheads. The Drahvins claim that the Rills shot them down and then killed one of them. But, for most of the first two episodes, we only hear the story of what happen from Maaga.

The problem with Galaxy 4 is that Maaga's nastiness becomes a bit too obvious a bit too quickly and as we find out more about the Rills the story falls into a pretty obvious parable about how the beautiful are not necessarily the good and the ugly are not necessarily the bad. I suppose the main crime of Galaxy 4 is that it is just all a little obvious.

And that there's a lot of walking backwards and forwards. It's a story that longs for corridors for people to wonder up and down.

Again though it is hard to fairly judge Galaxy 4 as three of its four episodes are missing from the archive. It was four but episode three aka Airlock was found in December 2011.

Having that one episode did change my opinion of the story compared with my last 're-listen'. It certainly makes Stephanie Bidmead's performance as Maaga more three-dimensional than the audio only might make you think. She gets a good speech, delivered almost down the barrel of the camera, which twists into something dark and sadistic. It does make me want to see more of the performances and again hammers home how hard it is to get a genuine view on a Doctor Who story when it is either entirely or mostly missing.

I flag this up now as we're heading into the parts of Doctor Who where there is more missing than exists. The re-discovery of The Enemy of the World and The Web of Fear is a case in point. Seeing The Enemy of the World made me love it far more than I ever did hearing it on audio only and not just because Patrick Troughton's performances are a glorious thing to see.

We finally also get to see what a Rill looks like. Sort of. But if we could find Episode 4 too so we can see them in their full glory because what is hinted at is a sort of be-fanged Jabba the Hutt, which is pretty good on a Doctor Who budget.

The Chumblies on the other hand are too cute and too slow for their own good. They are, at points, supposed to be threatening but it feels like being threatened by a passive-aggressive marshmallow as opposed to a 'new Dalek', which is what one fears was being aimed for here.

I don't think any of the main cast set the screen on fire at any point. Vicki isn't at her best here; Stephen is forced into the solid and staunch role vacated by Ian. The Doctor gets one or two moments but there's a bit too much aimless standing around for my liking, although I do love the fact that he completely and utterly fails to sabotage the Rill breathing apparatus despite a lot of semi-convincing faffing about.

So I'm going to stop here. There's not much else I can think of to say about this story, which is already evaporating from my memory. In its current state it is neither bad nor good but the existing episode three hints at a bit more depth, at least in performance, than I had previously noted.

Note: As @thejimsmith reminded me on Twitter, one piece of excellence in Airlock is the flashback as the Rills tell their story of what happened on landing. It's done POV, which is unusual and effective. Particularly as we see Maaga's ruthless dispatching of one of her own soldiers.