CLASSIC DOCTOR WHO ON BRITBOX – The Ark 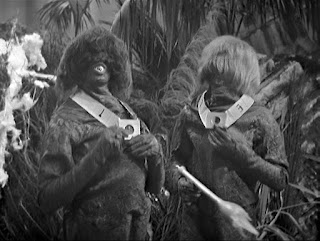 On 26th December 2019, 627 pieces of Classic Doctor Who content were made available to Britbox subscribers. Every Sunday in 2020, our Doctor Who expert, Tony Cross, looks back at some of the classic stories. Here is the First Doctor adventure The Ark...

The story involves the Doctor, Dodo (Jackie Lane) and Steven (Peter Purves) landing in what initially appears to be a jungle on Earth but TARDIS readings, the mix 'n' match nature of the wildlife and a steel sky make it obvious that we aren't on Earth itself. Dodo has a cold. This will become important.

It turns out that we are on a ship containing a handful of humans, known as The Guardians and their Monoid 'friends'. Both groups are fleeing the final destruction of Earth and making for the planet Refusis, which is seemingly uninhabited and suitable for colonisation. It will be another 700 years before the ship reaches Refusis. To while away the time the Ark's inhabitants are building a massive statue of a human being. No, it doesn't make much sense to me either. They've just started, and it should be completed by the time the Ark reaches Refusis.

The Monoids appear to have turned up on Earth after the destruction of their own planet and asked to join The Guardians in their flight. I have to say that the Monoids aren't the best realised of monsters with their Beatle wigs and waddle. They don't appear to be able to speak and have almost become slaves to the Guardians.

The TARDIS crew are initially welcomed by the Guardians, except by Zentos (Inigo Jackson) the deputy-commander. Jackson's acting is symptomatic of the disease that afflicts a number of guest actors in early Doctor Who, which I'm going to call 'Rep Syndrome'. It results in a performance lacking subtlety because an actor hasn't adapted to television and feels he needs to read every line as if he is doing Richard III. It isn't necessarily the actor's fault, it's as much a symptom of the time as anything else but when you compare Jackson's performance with Michael Sheard's as Rhos (brief though it is) you can see what benefits come from bring less theatrical.

Dodo's cold strikes both Monoids and Guardians and they have no immunity to it. This leads Zentos to turn on the TARDIS crew and have them put on trial as spies from Refusis. Steven tries to defend himself but is struck down by the illness himself. The Doctor's offer to help is initially turned down by Zentos, who wants them dead. But the Commander (Eric Elliot), although ill himself intervenes. The Doctor develops a cure, and everyone seems happy. The TARDIS leaves...

And re-materialises back in the jungle. The ship is all quiet and a little dirty. Then Dodo turns a corner and sees the statue. It looks pretty impressive but instead of a human being it is the statue of a Monoid. Cue end titles.

It turns out that there has been a Monoid Revolution. They now come with voices and heat guns. They are led by One. No names, just numbers for the Monoids. They have arrived at Refusis and One has a cunning plan to seize Refusis for the Monoids and destroy mankind completely. The Doctor and team are locked in 'The Security Kitchen'. Yes, it is silly.

Then the Doctor and Dodo are sent, along with Monoid Two to check out Refusis. It is inhabited by an invisible race. It is one of my made-up rules of Doctor Who that stories featuring invisible aliens are almost always rubbish: The Chase, The Ark and Planet of the Daleks.

In the final episode the Monoids fall out amongst themselves and the humans start their own revolution. The full circle has turned full circle. To quote Joni Mitchell, "We're captive in the carousel of time/We can't return from where we came/And go around and round and round/In the circle game."

Whilst the story has some good moments it is ultimately a little disappointing. The Monoids are a rubbish, the humans suffer from the problem of being both a bit wet and having abandoned trousers in favour of clothes made out of ribbons and the Refusians are just invisible. It passes the time but never really lives up to its potential, although at points director Michael Imison gets some really interesting shots.

There are interesting ideas that just don't quite come off.

I should award points for the decision to have an adventure that is set in the same location in different time zones that shows the impact of the Doctor's actions have - intentionally or unintentionally. It reminds me of how RTD shows the Doctor's actions in The Long Game leads to the world of Bad Wolf/Parting of the Ways, although I wouldn't claim that this would be an influence on those stories but who knows.

It's also the only story to ever really address the risks of time travel to the health of both the travellers and those they meet. There's a lot of diseases lurking about in the universe but the TARDIS crew never seem to get ill nor do they give other people illnesses, which is probably sensible because you can't really bog the series down with a series of medical checks pre-and post-every adventure. Perhaps the TARDIS does the job on the sly.

Hartnell's good but hardly stretched; Peter Purves does his usual quality job as Steven and Jackie Lane does her best with Dodo. This is Dodo's first proper story and the production team seem to decide that after episode one she's too northern for Saturday night on BBC 1 and her Mancunian accent gradually fades away, which is a shame. She gets to use 'dodgy', 'OK' and 'grotty', which riles the Doctor who gives her a patronising lecture on how he'll teach her to talk properly.

Anyway it is at least reasonable entertaining and I wonder if it suffers a bit because I watched it straight after the admirable The Massacre? But I'd say worth watching for the interesting ideas and imaginative direction even if it never quite works as well as I would like it to.