CLASSIC DOCTOR WHO ON BRITBOX – The Underwater Menace 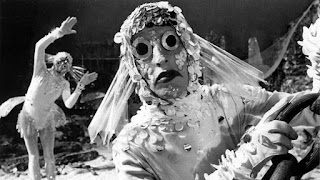 On 26th December 2019, 627 pieces of Classic Doctor Who content were made available to Britbox subscribers. Every Sunday in 2020, our Doctor Who expert, Tony Cross, looks back at some of the classic stories. Here is the Second Doctor adventure The Underwater Menace...

I have, over the years, developed something of a fondness for The Underwater Menace despite - or perhaps because - of its faults. It is, if nothing else, rather fun.

Directed by Julia Smith - one of the few women to direct a Classic Doctor Who story - and written by Geoffrey Orme The Underwater Menace finds the Doctor, Ben, Polly, and Jamie arriving on Atlantis. This isn't the Atlantis of ancient Greece but a mid-seventies run-down religious Kingdom in hock to Professor Zaroff (Joseph Furst). Zaroff has promised to raise Atlantis from the sea but, as the Doctor wheedles out of him, his plan is simply to blow a hole in the Earth's crust, chuck a whole ocean through the whole causing the Earth to explode.

It's not the sanest of plans but Zaroff is not the sanest of men. In fact, he's one Lungbarrow short of a full set of New Adventures. However, it isn't the most satisfactory of motives either. But Joseph Furst gives it everything and puts in one of the most entertaining performances in Doctor Who history. His frenzied cry of 'Nothing in the vorld can stop me now' has gone down in Doctor Who history as being over the top but actually it is a moment of perfection because this is the point at which Zaroff's insanity now goes public.

To be honest, though I love Furst's performance BECAUSE it is over the edge. Zaroff's a man who has decided to blow up the entire world just to prove a point to...well...someone. He's clearly barking but has been hiding it from the Atlanteans. The Doctor's appearance is what finally uncorks his mind. How else do you play it? Imagine how dull this would be if Furst reigned it in.

The scenes between Troughton and Furst are fabulous, especially the one where the Doctor talks Zaroff's insanity out of him. It's another revelation of Troughton's brilliance. Whatever else is going on in a Doctor Who story we now have the magnetism of Troughton to watch. He seems so comfortable on screen in a way Hartnell wasn't always.

With three companions aboard it is hard for everyone else to get screen time, but The Underwater Menace manages it reasonably well. No one needs to be rendered unconscious or kidnapped, although Polly almost gets turned into a Fish person.

Ah. The Fish people. Perhaps because I love The Web Planet so much, I have a high tolerance for actors pretending to be ants or bugs or - in this case - people converted into 'fish' people by Damon (Colin Jeavons with furry eyebrows.) They look like people in costume and the scene where they go on strike having been goaded into action by silver-tongued Irishman Sean (P.G. Stephens) does go on too long and is too much of an extended mime scene to work properly.

Sean is something of a cliché, but Stephens at least makes him an entertaining one. Other guest stars do a fine job, although Peter Stephens as Lolem doesn't quite work but I think that's because I've seen him as Cyril in The Celestial Toymaker recently and his voice was too Cyril for my own sanity. o & I loved Catherine Howe as Ara, the Atlantean girl who allies herself with the Doctor.

Yes, in the end, this isn't a Doctor Who story that I will claim is an under-appreciated masterpiece, but it is a story I enjoy immensely. It doesn't really make sense but who cares. This is fun. So, watch and enjoy.

NOTE: Although minus points to BBC for its lack of effort with the reconstructions of Parts One and Four. This DVD clearly bears the signs of being put out just to satisfy those of us who wanted to see the recovered Part Two. Too often the pictures and dialogue slip away from each other.