CLASSIC DOCTOR WHO ON BRITBOX – The Power of the Daleks 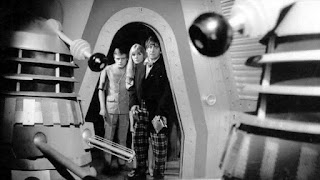 On 26th December 2019, 627 pieces of Classic Doctor Who content were made available to Britbox subscribers. Every Sunday in 2020, our Doctor Who expert, Tony Cross, looks back at some of the classic stories. Here is the Second Doctor adventure The Power of the Daleks...

We begin the Patrick Troughton era with The Power of the Daleks. It is written by David Whitaker and directed by Christopher Barry, who turn out to be a fine combination producing a fine introduction for the new Doctor but also one of the series great stories and probably the finest Dalek story ever.

This is the Daleks at their most devious. Using human being to get what they want, playing them off against each other until it is too late. Even though the humans themselves have been planning the Daleks make them look like amateurs. It is these Daleks we should use as the foundation for Dalek stories going forward.

They're clever, careful and manipulative. Each different human they deal with is teased with a different prize. Lesterson (Robert James) with knowledge and then everyone else with power.

But I suppose I have leapt ahead of myself. What of the big clunking elephant in the room? What of the new Doctor? Well, he's certainly different to Hartnell. Ben and Polly aren't even sure that it is the Doctor initially and The Doctor himself doesn't exactly go out of his way to reassure them: he talks of himself in the third person for example. It's a bit too easy for us to take this in our stride all these regenerations later but it must have been a hell of a shock for viewers at the time. Indeed, it isn't even called a regeneration at this point. There's a hint it is something that the TARDIS does for - or to - him. It's all left nicely up in the air.

Troughton himself sails through all of this majestically. Without making a great deal of fuss he gives us an entirely different Doctor. This 'Second' Doctor is less cantankerous and more mischievous. He can be manipulative in his own way and he's certainly capable of being mildly irritating with his recorder and unwillingness to answer direct questions. But - to me - he immediately feels 'right'. This is a new Doctor, but it is still THE Doctor. It takes Ben and Polly a little longer to feel like that with Polly coming around to him quicker than Ben.

And it is good for us to be in the company of companions we already know. They get to ask all the questions the audience wants to ask but they get less that brilliant treatment in this story. Neither of them really gets to do anything beyond ask questions and get captured. Although, right towards the end I did like the fact that Polly is genuinely distraught at the mass murder going on around them. Too often, and understandably, in Doctor Who terrible things happen and they go almost unremarked. Only rarely - here, in Warriors of the Deep and Resurrection of the Daleks to name a few - does it have a real impact on characters. The classic example being Rory and Amy's rapid adjustment to the loss of their child and hence - apparently - Steven Moffat's decision to make Heaven Sent, a Doctor Who story entirely about grief.

The new Doctor and team arrive on Vulcan, an Earth colony. They arrive at the same time as an Earth Examiner who is shot in front of them. A series of things then happen. The Doctor gets dragged into plots and counterplots after being mistaken for - or allowing himself to be mistaken for - the dead Examiner. Most importantly he discovers Lesterson's work on a space capsule they found in the mercury swamps. Lesterson, brilliantly played by Robert James, has found the occupants of the capsule and they turn out to be... Daleks.

Despite the Doctor's warnings, Lesterson is played by both the Daleks and his assistant Janley (Pamela Ann Davey) who is one of the leaders of the rebels. Everyone runs rings around Lesterson who is too blinkered to realise what's going on until it is far, far too late. It's at that point that Lesterson breaks down. It's then that Robert James's performance is exceptional, and his death scene is one of the best played and most pathetic in the programme’s history.

Basically, there's a governor (Peter Bathurst), his security chief Bragen (the coldly brilliant Bernard Archard), the deputy governor, Quinn (a staunch Nicholas Hawtrey) and some rebels. Everyone seems to be up to something, except the Governor who is being comprehensively out-thought and out-manoeuvred by Bragen. It's is Bragen who is our human villain. Indeed, at one point a Dalek even seems to take the moral high ground by asking of Bragen - who has just had it killed Governor Hensell - why humans kill other humans, which is perhaps a darker moment than expected.

Everyone is basically so focused on their own goals that they start to ignore the danger of the Daleks, even as they get more and more brazen. The Daleks offer themselves as 'servants', which each faction feels it can use differently. They ignore the warnings until the Daleks set off to massacre everyone. The massacre is shocking and dark. Once more the threat of the Daleks seems real. They're not amusing, they're bloody terrifying.

Fortunately, the Doctor manages to stop them by blowing up their power source, which does major damage to the colony's power grid too. This gives the Doctor a chance to skip off quietly before there're any awkward questions. Daleks defeated our new Doctor heads off into to sunset companions in tow.

It's really good, meaty stuff this with superb performances - Robert James and Bernard Archard being the best of the bunch. It's a great story with which to introduce a new Doctor as it pits him up against his oldest enemies straight away and by defeating them it 'baptizes' our new Doctor.

Troughton's superb too and I look forward to spending more time in his company. It is just a shame so little of his era exists on video. So, I'll be relying on reconstructions a lot in the weeks ahead. And I look forward to re-visiting this with the animated version.