CLASSIC DOCTOR WHO ON BRITBOX – The Tenth Planet 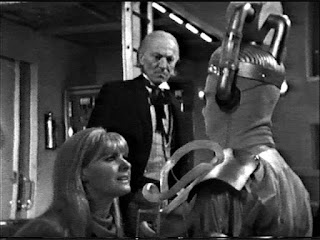 On 26th December 2019, 627 pieces of Classic Doctor Who content were made available to Britbox subscribers. Every Sunday in 2020, our Doctor Who expert, Tony Cross, looks back at some of the classic stories. Here is the First Doctor adventure The Tenth Planet...

The Tenth Planet is the final story of the William Hartnell era. He is, from this point onwards, not The Doctor but the First Doctor. It is also the first story to feature the Cybermen and - arguably - the first proper 'base under siege' story, which is about to become something of a Doctor Who staple.

Let's begin with the Cybermen. Here in their earliest incarnation, they are a little lumbering. They're World War One tanks to the later World War Two tank Cybermen. They carry their weapons and they have still human hands, which is a creepy and effective touch that lets us know before we are told, that the Cybermen were once like us. They have weird sing-song electronic voices, which are delivered not by the actors playing the Cybermen but by Roy Skelton and Peter Hawkins. They actually sound very much like early voice synthesisers (and I had an Intellivision - Google it young people - that had such a synthesiser for the rather brilliant B-17 Bomber game. It didn't sound dissimilar to these voices, except with an American accent.) They're an effective new monster. The problem with the Cybermen will be that the television series can (almost) never make them as terrifying as the idea of them should be. I'm not the first person to say this but it is Star Trek: The Next Generation that does the Cybermen most effectively and it calls them The Borg.*

The other enemy the Doctor faces in this story is General Cutler played in fine shouty form by Robert Beatty. General Cutler is in charge of the Snowcap base and is clearly a man on the edge of a nervous breakdown. Indeed, there's a line from Good Morning Vietnam** that might apply but this is a family-friendly article. Sort of. General Cutler is going to be the first in a long line of highly strung men who are psychologically incapable of running a bath let alone having authority over men with guns. Or ridiculous bombs. It doesn't help that Snowcap base is trying to save Cutler's son who has been sent on a suicide mission. Cutler goes so far off the deep end his death at the hands of the Cybermen feels like a rescue.

The rest of the cast do a fine job of being staunch and serious. It's supposed to be set in 1986 so it has an unusually international cast. Beatty is Canadian, John Brandon is an American playing an American Sergeant, Steve Plytas - a face familiar from British TV in the 60s & 70s - plays Wigner. Plytas himself was Greek but Wigner is non-specifically European (but based in Geneva), Alan White (Australian) and Earl Cameron (Bermudan) play the ill-fated occupants of Zeus IV and Wigner's office staff includes a gentleman in African dress (but who never gets to speak.) It makes for a nice change.

Then English actors fill up the rest of the cast. David Dodimead does a fine job as Barclay, the scientist with doubts about Cutler's decision making whilst Dudley Jones brings a certain amount of reality to the rather cynical and pathetic Dyson. There's only one really dud performance and that's Shane Shelton's Tito.

Michael Craze and Anneke Wills do a fine job too. Polly's courage when facing up to both General Cutler and the Cybermen is exemplary and Ben's pained response to killing a Cyberman is really well-played. However, Polly's courage is stretched to breaking point towards the end. They're a good pair, Ben and Polly.

This though is Hartnell's final story and I have come to praise Hartnell not bury him. He's excellent throughout this story - even though he was absent in Part Three due to illness. I said that The Smugglers was - possibly - the moment the Doctor becomes the Doctor that we know and love but here he is THE DOCTOR. He tries to warn Cutler what is coming and is ignored. He stands his ground and in the final episode he is simply brilliant. I'm going to say more about The First Doctor in another article, which will be coming soon. What I will say here is that Hartnell is a far better Doctor than some people - who think only of Billy-fluffs etc - give him credit for. He's also carving out a part for the first time that others will pick up and run with. It's a part though that no one else has done. He isn't playing the First Doctor is William Hartnell he is just playing The Doctor. There are no others and by the end of his time in the part we have perhaps reached the point at which another actor can pick up and run with the part, taking it in new directions, without breaking it.

I should say that the story itself is mainly pretty good. It's tense, especially the end of Part 3. It's violent - for example, Cutler's attack on Ben - and it is packed full of edgy people on the verge of losing it. People are scared in this story too, which I like. Not everyone wants to be a hero and not everyone can be.

It's a fine ending to the Hartnell years and sews seeds for what is to come. We take regeneration for granted now. After all, there are many more Doctors now but back in 1966 it must have been something of a shock. Particularly as Part Four ends with the new Doctor's face but not a word. We don't know what's happened, but the Doctor has changed and the TARDIS had something of a spasm whilst it was happening. It certainly makes us want to see what happens next. Who is this new man and what's he going to be like?

Let's leave the last word to the Doctor himself:

"It's far from being all over."

*Big Finish, on the other hand, make exceptional Cybermen stories. You should give them a listen. Starting with Spare Parts.

**It is here should you wish to look