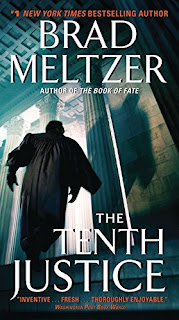 Steve Taylor-Bryant has given himself the reading challenge of reading every full length novel written by Brad Meltzer. This week it is The Tenth Justice...

Landing a prestigious position as a Supreme Court clerk fresh out of Yale Law, Ben Addison is on the ultra-fast track to success—until he inadvertently shares a classified secret with the wrong listener. And now the anonymous blackmailer who made a killing with Ben's information is demanding more. Guilty of a criminal act, his golden future suddenly in jeopardy, Ben turns for help to his roommates—three close friends from childhood, each strategically placed near the seats of Washington power—and to his beautiful, whip-smart fellow clerk, Lisa Schulman.

But trust is a dangerous commodity in the nation's capital. And when lives, careers, and power are at stake, loyalties can shatter like glass . . . and betrayals can be lethal.

I remember reading The Tenth Justice for the first time. It was the second Brad Meltzer novel I picked up and I loved it. What ProjectMeltzer has allowed me to do is not just read something wonderful again, but let me learn things I didn’t get or know first time around and the biggest shock for me is that The Tenth Justice is Brad Meltzer’s debut novel. It’s an incredible thriller. At the time I was really into legal dramas and The Tenth Justice is set in the Supreme Court of the United States and it was fascinating for that, but the human story is one of an assured and seasoned author which makes The Tenth Justice an epic debut book.

In most legal thrillers like this you find the main protagonist easy to root for which is, a lot of the time, what harms the storytelling as most of the genre do this and it can sometimes grate on you as a reader. However, with Ben Addison it’s different as, whilst he may be the high flying Yale graduate who now clerks for the most powerful judges in the land, it’s his mistake that he has to fight against. He got duped, he broke the law and then doubles down on the lawbreaking by making his friends accomplice to the crimes by using their placements within the halls as power to help him. This is the angle that makes the book so compelling and, because Meltzer drives the narrative at some pace, it’s about halfway through before you realise you are essentially rooting for someone who is not squeaky clean but you do it because you know how easy it would be to dupe you because Meltzer just has.

It may not be perhaps the most realistic of Meltzer’s books but, in starting a book like this, you have to suspend your disbelief a little anyway and if you can then The Tenth Justice is a corker, cinematic in its style and thoroughly enjoyable.