TV - Tales from the Loop 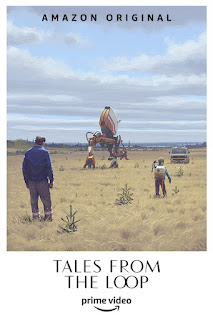 Inspired by the wondrous paintings of Simon Stålenhag watch the trailer for Tales from the Loop, coming in April to Amazon Prime ...

Tales from the Loop explores the town and people who live above “The Loop,” a machine built to unlock and explore the mysteries of the universe — making things possible that were previously relegated only to science fiction.

In this fantastical, mysterious town, poignant human tales are told that bare universal emotional experiences, while drawing on the intrigue of genre storytelling.

Created by Nathaniel Halpern and executive produced by Matt Reeves (yes, the Batman guy, Matt Reeves), the series stars Rebecca Hall, Duncan Joiner and Daniel Zolghadri alongside Jonathan Pryce and Paul Schneider. Simon Stålenhag, the artist whose work inspired the show, is a co-executive producer, and he also created the key art for the series, like the poster above.

Tales from the Loop loops into Amazon Prime on April 3rd.