CLASSIC DOCTOR WHO ON BRITBOX – The Web of Fear 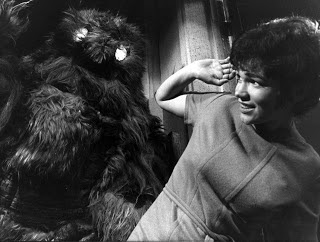 On 26th December 2019, 627 pieces of Classic Doctor Who content were made available to Britbox subscribers. Every Sunday in 2020, our Doctor Who expert, Tony Cross, looks back at some of the classic stories. Here is Today is the Second Doctor adventure The Web of Fear...

Like I said in my Enemy of the World article who knew I'd get a chance to watch The Web of Fear on DVD. It seemed lost forever but then it wasn't. Oh, until we realized that Part Three was still missing. Missing presumed stolen.

I'd like to take a moment here to speak to the outrageous horror who 'stole' Part Three and who I assume paid a lot of cash for 'a very expensive gloat'. I hope it brings you no joy at all. I hope that it falls on your head from a great height. I hope - whoever you are - that it rots your mind. You're obviously rich so spend the money on making up for your nasty behaviour. You can't take it with you. Personally, I think you're a very sad man. And you will be a man. There's no doubt about that.

Anyway, enough of my dislike of the unknown thief.

It's partly I think because it is in my home city, in locations I know and worked near. So, for example, I know how out of breath the Doctor, Jamie, and Victoria would have been climbing the stairs at Covent Garden. I've done it myself. It's a lot of stairs. The idea of being trapped in the London Underground by a combination of Yeti and killer fungus plays to some of my current and childhood fears. Even now I can't go too close to the edge of an Underground platform as I feel like I'm being dragged towards the tracks and an unpleasant death by either crushing or electrocution. So, there's that.

Then there's Troughton. He's majestic in this. The way he lowers his voice when he's about to say something worrying and/or terrible. His light flirtation with Anne Travers (Tina Packer). His concern for Jamie and Victoria. His frustration when HIS plan doesn't come off as the story comes to its end. His delight when the control sphere comes back to life. Everything. This is Troughton at his best. And that best is better than almost any other actor to play the Doctor. He's got charisma to burn but he's also a bloody good television actor. He gets the medium. You can see why other actors who have played the Doctor tend to quote Troughton as an influence. But I could write a paragraph similar to that for every single Patrick Troughton story. He is, almost without exception, the best thing in any Patrick Troughton Doctor Who story.

I should also say how much I enjoyed Tina Packer's performance as Anne Travers. She's a suit wearing female scientist who takes no nonsense from Captain Knight - or anyone else. She works closely with the Doctor (and her father) on nitty-gritty scientific work. She feels like The Doctor's equal without anyone making a huge fuss about it.

Anne Travers is Professor Travers's daughter and that's another thing I like about this story is that it reminds us that the TARDIS travels in time by letting us meet a character we last saw only twelve weeks ago. So, Professor Travers 'tidied up' the mess left behind in Tibet after The Abominable Snowmen bringing back a 'dead' Yeti robot and some damaged bits 'n' bobs. Unfortunately, being a scientist in Doctor Who he can't help but fiddle with something that should not be fiddled with and thus starts chaos and murder.

It brings me to one of my complaints about this story: the Jewish cliché that is Julius Silverstein (Frederick Schrecker). I'm not Jewish so perhaps I'm over-reacting but he's not the most subtle of portraits but then Jack Watling doesn't exactly underplay Professor Travers.

Another obvious thing I haven't mentioned yet is that The Web of Fear is the first time we meet Alistair Gordon Lethbridge-Stewart (Nicholas Courtney). Here he is just Colonel Lethbridge-Stewart and his early appearance happens at a point where we are clearly meant to be suspicious of this new arrival, which is great. But Lethbridge-Stewart's willingness to accept the Doctor for what he purports to be is rather charming, especially in the face of Captain Knight's mocking cynicism.

This is a classic Doctor Who story in terms of the inability of soldiers to deal with the enemy their facing. Indeed, it's possible to argue that Part Four is one of the bleakest in Doctor Who history. People die. Lots of people. Not just faceless men in uniform but men we've got to know. Lethbridge-Stewart's reaction when he returns to HQ is well-played by Courtney and for once the sacrifice of soldiers in a Doctor Who story actually feels like it matters to everyone.

Captain Knight is played by Ralph Watson, who does a good job of his first role in Doctor Who. He'll later crop up in The Monster of Peladon and The Horror of Fang Rock

I've not said much about Frazer Hines or Deborah Watling in this story but that's because they do their usual sterling work, although Victoria is in danger of becoming the used only as a pretty girl hostage. Jamie is ridiculously brave throughout, even in the face of impending death.

So, this one really did it for me. There's even time to watch the Doctor and Anne do actual scientific work.

Oh and - without spoiling it - the surprise reveal, in the end, is genuinely quite surprising and sad. If you've not read the novelisation or listened to the audio. Oh, and boo BBC Worldwide - or whoever - for the utter lack of effort with the DVD release from an extras point of view but another large cheer for Philip Morris's work in recovering the episode.

And once more my undying dislike of the person who stole Part Three.