CLASSIC DOCTOR WHO ON BRITBOX – The Enemy of the World 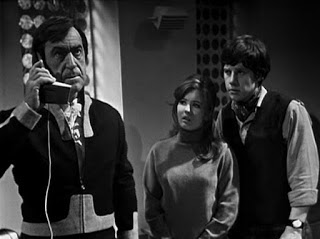 On 26th December 2019, 627 pieces of Classic Doctor Who content were made available to Britbox subscribers. Every Sunday in 2020, our Doctor Who expert, Tony Cross, looks back at some of the classic stories. Here is Today is the Second Doctor adventure The Enemy of the World...

Who would have thought that I'd get a chance to watch and write about Enemy of the World? Lost and unseen for nearly 45 years and then discovered in Jos, Nigeria by Philip Morris of Television International Enterprises Archive. We owe Philip Morris a great debt of gratitude and I hope that his work yields up more lost BBC programming.

The problem with a returned story, of course, is that it carries a weight of expectation. The Enemy of the World wasn't a lost story that topped most people's lists of stories they'd like to see returned. It's an oddity in Troughton's second season: the one without monsters. So sometimes it got forgotten about. There's also the joy in getting a story back that's lost which means you almost feel obliged to love it.

Well, there are lots of things to love about The Enemy of the World. The most important of which is Patrick Troughton himself. No audio or reconstruction can really give you a clue as to how magnificent an actor he is and the depths of his Doctor.

Episode One of this story is a thing of joy, especially as The Doctor goes frolicking (the only suitable word surely) about on the beach clad in longjohns. But The Enemy of the World gives us a bonus: a double whammy of Troughton as he gets to play Salamander, the Mexican wannabe ruler of the world (according to his erstwhile comrade Giles Kent (Bill Kerr)). This gives Troughton a chance to show us his acting chops and he seizes it with both hands.

Salamander is clever and nasty, which always makes for more fun. And there're some great moments but my favourite is the way - in a later episode - he sits back and lights up a massive cigar after a particularly hard days villainy.

So for nothing else but Troughton you've got to be pleased to see this story again.

Then there's Jamie (Frazer Hines) and Victoria (Deborah Watling) as his companions. As a friend of mine pointed out on Twitter whatever the relationship between them is supposed to be on - and there's much talk of brother/sister previously - it would be very easy to see them as something more than that. I've no doubt that if the internet had existed in 1967/68 people would ship Jamie and Victoria. I love the way their costumes are echoes of each other and there's some nice mirroring of body language too.

Then there's some of the other performances: Milton Johns as Benik, the sadistic and creepy Salamander sidekick, Carmen Munroe as Fariah (whose death scene is probably the darkest moment in the entire story and confirms Benik's unpleasantness), Mary Peach as Astrid, the action woman who seems to have more honour than most of the rest of the supporting characters and Bill Kerr as the snarling, devious Giles Kent.

My favourite performance though is probably Reg Lye as Griff the Chef. The character might almost be a totally unnecessary one. He does nothing to further the plot. He doesn't even give much in the way of exposition. He's just a grumpy Aussie chef trying to get on with his job. He might actually be the most ordinary of ordinary blokes in classic Doctor Who. And I love the performance.

Actually one of the little things to enjoy in this story is a few glimpses of normal humanity amongst guards: eye-rolling at annoying superiors, horror at unpleasant behaviour etc. You don't see it much in Doctor Who and it makes a refreshing change.

There're a couple of performances that draw the attention for other reasons: David Nettheim does a reasonable job as Fedorin but is lumbered with possibly one of the weediest characters you can imagine and is forced to spend most of his time looking flustered and concerned. And then there's Adam Verney's Colin. Ah. Colin. It's one of those over-keen performances that 50s and 60s television are scattered with as actors struggle to adjust to the smallness of the medium. It's not helped by the fact that Colin is supposed to be keen but it's slightly jarring.

The story itself, which is half-James Bondian supervillain, secret bases and half-Prisoner of Zenda doppleganging, isn't bad but it is probably too long at 6 episodes, but having said that it never really feels boring just padded a tad. It also makes a pleasant change that there is no Monsters. It’s just human beings being human beings. Or to use a Twelfth Doctor quote it is partly a story of people who, "...Just want cruelty to beget cruelty. You’re not superior to people who were cruel to you, you’re just a whole bunch of new cruel people. A whole bunch of new cruel people being cruel to some other people, who’ll end up being cruel to you."

Barry Letts, who directed this, certainly gets the pacing right in the first episode but it wobbles a bit in the 3rd and 4th episodes before getting back on track again in the 5th and then rushing towards its conclusion in the 6th. Maybe I have no idea what I'm talking about.

However, the final episode does see Salamander/the Doctor go head-to-head inside the TARDIS, which works exceptionally well considering the time this story was made and is a final piece of proof of Troughton's magnificence.

So to cut a long story short: I enjoyed it but more for the performances than the plot. It was good to get it back. It's good to see Troughton in such excellent form. You can see why Troughton is the Doctor's Doctor. He's capable of bringing subtlety out of even the cheesiest lines.