CLASSIC DOCTOR WHO ON BRITBOX – The Ice Warriors 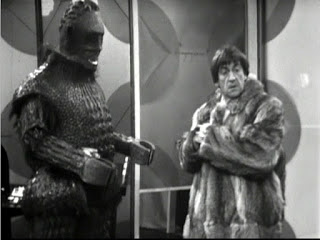 On 26th December 2019, 627 pieces of Classic Doctor Who content were made available to Britbox subscribers. Every Sunday in 2020, our Doctor Who expert, Tony Cross, looks back at some of the classic stories. Here is Today is the Second Doctor adventure The Ice Warriors...

Three stories into Troughton's second season and we're again in a base under siege. It's under siege before the story begins but by nature - in the form of a whacking great glacier - not the monstrous. Indeed, as this story progresses you might even argue that it is a story about two bases under siege.

The humans in their lovely futuristic looking clothes are besieged by the Ice Warriors but only as long as they don't know what kind of engines power the Ice Warriors craft. But the Ice Warriors to are under siege. The humans are using an Ionizer to try and keep the glaciers back. That Ionizer is capable of destroying the Ice Warriors ship if it is used. So, for a large chunk of the story, it's a Mexican stand-off.

And I'm afraid we come to a problem: the Ice Warriors themselves. I've read that Mark Gatiss had trouble persuading Steven Moffat to let him bring the Ice Warriors back because to Moffat they were the perfect illustration of the slow, clumsy and incomprehensible Classic Doctor Who monster and on the basis of this story I'd have to agree with him. They look great when standing still but as soon as they start moving, they waddle slowly about like a duck inside a turtle shell. Their whispering voices, which actually I like, are - on occasion - difficult to understand. But they were obviously memorable enough on their first appearance to get a follow-up.

My other complaint about them is their so stupid. They move straight to violence without thinking about it. Varga threatens to kill the Doctor pretty much instantly even though he's been banging on about 'trapping' someone for ages, which his excuse for keeping Victoria alive. They're just blundering oafs, which is a shame really but explains the...well...we'll keep that for The Seeds of Death.

The best thing about this story though are the performances. It (almost) goes without saying that Troughton is fabulous. He is. Deborah Watling gets to be scared a lot, but she's got that ability to be both scared and brave at the same time. An ability that Barry Letts attributed to Liz Sladen. She's terrified almost all the time but she still tries to do the right thing, which makes her heroic. I also love her costume in this story. Frazer Hines never fails to make Jamie feel real and his chemistry with Troughton and Watling is excellent. This is a TARDIS crew that suffered badly from the archive losses but which now might be in need of some reassessment following the return to the archive of The Enemy of the World and The Web of Fear.

The main cast is given superb support here though from Peter Barkworth as Clent. He's the very definition of a man out of his depth, but then who wouldn't be. He's become reliant on the computer to confirm his decisions and the computer can't handle the mess it is in and so he hovers around the edges of a nervous breakdown without quite having one. I ended up feeling a little sorry for Clent who is challenged by The Doctor, by Penley (Peter Sallis) and then gets told by Varga (Bernard Bresslaw), the Ice Warrior Commander, that his life is pretty much worthless. I'm not sure anyone would come out of such a testing well.

Peter Sallis also gives an excellent performance as Penley. I think this is the only thing apart from 'Last of the Summer Wine' that I've ever seen Peter Sallis is in and it makes me want to find dig out other things he's done. Perhaps Toby Hadoke can help me? [Pops off to Twitter for a moment.] Penley has abandoned Clent's team and fled to the wilds shacking up with Storr (Angus Lennie), who is an anti-science man. Storr is destined to meet a sticky end. Penley, forced to go back to Clent due to Jamie's injuries, will end up winning the computer v humans argument.

There's a nice little scene at the end between Penley and Clent where their obvious friendship comes through and Penley gives Clent the nudge he needs to reset himself back to 'normal'. It nicely played.

Clent's closest colleague, Miss Garrett (Wendy Gifford) tries throughout to stay committed to the computer and Clent. She defends Clent to Penley and the Doctor. She's dressed, like everyone in this story, in a late-60s version of future fashion. If anything dates this story it is the combination of the fashion. But I'm afraid I developed a little crush on Miss Garrett/Wendy Gifford, which I'm sure you don't need to know. 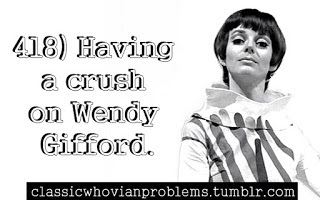 So, to conclude an article that is in danger of escaping from me The Ice Warriors is a story to watch for the performances. Its plot isn't spectacularly original, its final episode is a messy little thing but Peter Sallis, Angus Lennie, Peter Barkworth, Wendy Gifford, Frazer Hines, Deborah Watling and most particularly Patrick Troughton make it well-worth watching.