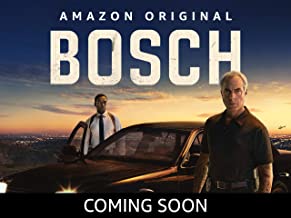 The sixth (and penultimate) season of Bosch starts on Amazon Prime Video in April. Watch the trailer...

After a medical physicist is executed and the deadly radioactive material he had with him goes missing, Detective Harry Bosch finds himself at the centre of a complex murder case, a messy federal investigation and a catastrophic threat to Los Angeles - the city he's pledged to serve and protect.

Again starring the wonderful Titus Welliver as Harry Bosch of the Hollywood division of LAPD, alongside Jamie Hector as his police partner Jerry Edgar, Amy Aquino as his boss, Lt Grace Billets, and Lance Reddick as the chief of police, this season's story is based on two of the Bosch books by Michael Connelly, The Overlook and Dark Sacred Night.

All episodes of season six arrive on Amazon Prime on April 17th.