CLASSIC DOCTOR WHO ON BRITBOX – Colony in Space 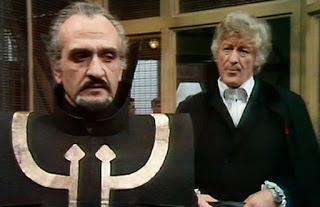 On 26th December 2019, 627 pieces of Classic Doctor Who content were made available to Britbox subscribers. Every Sunday in 2020, our Doctor Who expert, Tony Cross, looks back at some of the classic stories. Here is the Third Doctor adventure Colony in Space...

I said in my 'Claws of Axos' article that the biggest sin Doctor Who could commit imho was to be dull. Unfortunately, I then sat down to watch six episodes of 'Colony in Space'. Less a Doctor Who adventure, more an Open University lecture of the perils of space colonisation in the 25th century.

The story opens with three of the least impressive Time Lords in Doctor Who's history telling us that The Master has stolen some of their files* & is off to do some bad things. As usual they decide that The Doctor is the man to do their dirty work and so Pertwee gets to land on his first alien planet.

It is, of course, a quarry. With green primitives & a bunch of dull colonists. We also discover quite rapidly that there's a bunch of semi-evil corporate mining types who have landed on the colony with a view to stealing its mineral deposits. To do this they have embarked on a plan to drive the colonists from the planet. This involves a big green lizard 'hologram' & a robot with claws. Yep. It's one of those plans. Most of the IMC chaps have no problem bumping off colonists if they get their bonuses. Fortunately, their mining engineer Caldwell, played by the ever-effective Bernard Kay, has doubts. The Doctor helps the coloni...zzzZZZZZZzzzzzzZZZZZZZzzzzz

Then the Master turns up pretending to be an adjudicator & his plan is revealed. Slowly. Very slowly.

Apparently this planet was once the centre of a great civilisation who built a whacking great weapon of mass destruction. They tested it on what is now the Cra....ZzzzZZZZZZZzzzzzzZZZz....sorry, it's been a long week.

The Third Doctor gets to patronise an alien civilisation that politely decides to destroy itself to prevent The Master get his grubby little hands on said weapon. Jo gets to be an idiot again - walking through an alarm beam she's just spent a minute crawling on the ground to avoid.

Ashe, the leader of the colony, played by John Ringham (who is much more fun when he's Richard IIIing it as Tlotoxl in The Aztecs) also sacrifices himself. Neither sacrifice actual means much because no one seems to care very much. Even Ashes' daughter Mary - played by a very young, pre-Coronation Street Helen Worth - seems perky enough five minutes afterwards. Cauldwell joins the colonists & everyone gets to live happily ever after.

The Doctor gets to be rude about the Brigadier's intelligence in the closing seconds: again. After 'Claws of Axos' & this the wonderfully high standards of Season 7 seem light years away.

*It's nice to see that Time Lord files are on paper & appear to fit nicely into bog standard Earth filing cabinets. The Master has two such filing cabinets in his TARDIS, which the Doctor searches as if we're watching a 1950s thriller.