CLASSIC DOCTOR WHO ON BRITBOX – The Daemons 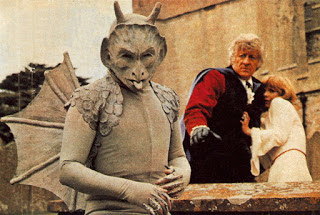 On 26th December 2019, 627 pieces of Classic Doctor Who content were made available to Britbox subscribers. Every Sunday in 2020, our Doctor Who expert, Tony Cross, looks back at some of the classic stories. Here is the Third Doctor adventure The Daemons...

When watching an old story there's a tendency to have one’s opinions attached to the weight of fan law. Hence 'The Web Planet' & 'The Gunfighters' are awful (neither of them is. I will wax lyrical on why 'The Web Planet' is a thing of joy & wonder another time). Or a story is a 'Classic'.

'The Daemons' is one of those stories that carried that label. It's well liked by those that made it - cast & crew. It's had a video made about it 'The Return to Devil's End' so it had a reputation, perhaps a little less so now, for being one of the highlights of not just the Pertwee years but of Doctor Who in general.

So I was a little cynical. I expected to find it a bit disappointing on re-watching, like I did 'Tomb of the Cybermen' but I didn't. I really enjoyed it. Perhaps it helps that the previous story ('Colony in Space') was so dull but this was a joy to watch.

All the regulars are here & on top form.

The Master looks damn good both as a vicar & a black magic occultist bent on sacrificing Jo Grant at the end in order to get from Azal his power.

You'd think by now, knowing the Doctor is exiled to Earth, the Master might avoid the place for a while. Skulk quietly in a corner of the Universe somewhere where he can get on with being evil to his heart's content but no. Instead he's trying to carry out his plan in an English country village where a live television archaeological dig (BBC3's answer to Time Team) is taking place whilst the Doctor is lurking a few miles down the road.

As I pointed out a couple of articles ago with plans like these it's no wonder the Master zips through his regenerations.

It just confirms my theory that neither the Doctor or the Master are playing seriously. It's like the Master's agreed to help make the Doctor's exile less dull by taking him on at 'Stop Me Before I Destroy The World'.

The Doctor is quick to pick up on the danger of opening the 'Devil's Hump' but we never quite know why or how the Doctor knows so much about Azal or his plans. His explanation of the back story seems curiously well-informed.

There's a lovely guest performance from Damaris Hayman as white witch & apparent Joyce Grenfell impersonator Miss Hawthorne. She gets a lovely early scene confronting the Master (disguised as a priest Mr Magister. Don't get me started on the Master's penchant for taking names whilst 'undercover' that are either foreign translations of the word 'Master' or anagrams.) & a lovely line after he tries & fails to hypnotise her: "Why should I believe you. A rational existentialist Priest indeed!"

The UNIT crew are all good in this to & the attack on the Church suitably impressive even if Bok is less so. UNIT looks like it is more than three blokes & a jeep in this. Everyone seems to have proper military haircuts at this point still too.

Jo is lovely, ditzy & silly. Her attempted self-sacrifice to save the Doctor at the end is brave & allows our heroes to win even though IT MAKES ALMOST NO SENSE. Never let it be said that it was only Russell T Davies that tended to pull silly endings out of a hat in order to escape his own cunning plotting. Other production teams have done it before.

However I think it is forgivable in this case. I should also add that I might be slightly over-positive because in the gap between episodes 4 & 5 I watched Brentford FC beat Exeter City to make it to Wembley for the JPT final. This turned me into something of a grinning idiot as I entered the last two episodes.

Even allowing for that though this was fun. With its English country village setting that hides many secrets: the Post Office Manager is nicking money; the Grocer pads out his bills etc (not to mention there being a Black Magic Coven in the Church cavern) it's almost a classic British horror setting & would fit pretty well into Steven Moffat's era of Doctor Who.

Oh & the scene at the end which ends with the Brigadier's: 'I'd rather have a pint' line is a nice little moment.

The end of Season 8 & possibly its best story (maybe 'Mind of Evil' pushes it).