CLASSIC DOCTOR WHO ON BRITBOX – Day of the Daleks 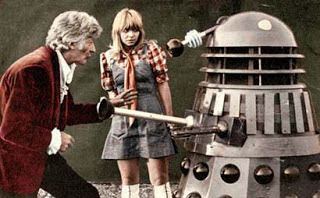 On 26th December 2019, 627 pieces of Classic Doctor Who content were made available to Britbox subscribers. Every Sunday in 2020, our Doctor Who expert, Tony Cross, looks back at some of the classic stories. Here is the Third Doctor adventure Day of the Daleks...

So, we kick off Season Nine with the first appearance of the Daleks since Patrick Troughton finished them off in 'Evil of Daleks'. Well we know that nothing keeps a good Dalek down & here they are again looking, it must be said, a bit small in number & slightly battered.

Their voices are also slightly odd. I'm sure there's an expert out there - Nick Briggs - who can tell me why: something to do with the ring modulator probably but I digress (again).

It's another Peace Conference but this time mysterious assailants are trying to kill the man leading the Conference, Sir Reginald Styles. It turns out that these assailants are from 200 years in the future & Sir Reg is blamed for the destroying the Conference he tried to create plunging the Earth into war & allowing the Daleks to mop up the survivors & once more rule the Earth. So, guerrillas from this future have travelled back in time to kill Sir Reg.

Jo gets dragged into the future by a dodgy time machine & get buttered up by the Controller. She's quite trusting Jo. To the point of suicidal naivety. So she's a bit shocked when the Doctor turns up, having gone the long way round & starts being rude to the Controller in that inimitable way the Third Doctor has when dealing with any type of politician or civil servant.

In the final episode a cosy chat leads the Doctor to realise that it wasn't Sir Reg that blew everyone up but the guerrillas themselves in their attempt to stop blowing everyone up. We are in a paradox.

For a series where the lead character trots around in a time machine it is quite rare that time travel forms a part of the plot (at least until Steven Moffat arrived)so it is always quite interesting when we get dragged into discussions about Blinovitch Limitation Effects & paradoxes. By going back in time, the guerrillas created their own future.

So the Doctor & Jo rush back, clear all this up & prevent the destruction of the Conference. Which means that the guerrillas future never happened, which means they never had to travel back in time in the first place so the Peace Conference would have gone ahead as before & everyone would have been killed so the guerrillas would have had to come back in time to prevent Sir Reg's crime except that they'd be stopped by the Doctor & wouldn't need to travel back...right, I'll stop. I'm getting dizzy.

There's a paradox within a paradox here. Perhaps the Doctor, with his Time Lord skills, can nip & tuck everything to avoid everyone being caught in a strange time loop.

That's the flaw with the story really. If you ignore that then it's an enjoyable romp. The Daleks are a wee bit disappointing but it feels like Day of the Daleks is an epic waiting to happen but BBC budgets & 70's special effects couldn't let it breathe.

Because of this I'm looking forward to 'The Day of the Daleks' special edition. I'll admit to quite like watching old Who with natty new effects, especially those stories where one particularly terrible piece of special effects or design lets down the whole thing a little. Yes, I'm looking at you inflatable snake in Kinda!

I like Aubrey Woods' performance as The Controller. All icy politeness & emotional control, even at the end.

UNIT get to look proper military & useless at the same time. Getting whacked in numbers by the Daleks & Ogrons in the final battle sequence & leaving a back door to a building that is supposed to be heavily guarded both, err, unguarded & unlocked. Just a minor security cock-up there Brig.

Any road up. I enjoyed this. It's a four parter so it flew by & it does feel like they've made a real attempt to go for something big, even if they can't quite pull it off.