CLASSIC DOCTOR WHO ON BRITBOX – The Curse of Peladon 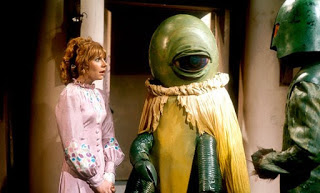 On 26th December 2019, 627 pieces of Classic Doctor Who content were made available to Britbox subscribers. Every Sunday in 2020, our Doctor Who expert, Tony Cross, looks back at some of the classic stories. Here is the Third Doctor adventure The Curse of Peladon...

I have to admit to having had a soft spot for The Curse of Peladon, but it has been years since I last watched it & I was glad to discover that the memory doesn't always cheat. This was great.

Firstly it is nice to get the Doctor off Earth & involved in something interesting. Peladon feels like a planet with a proper civilisation & with people who have been busy doing other things before the Doctor & Jo turn up. The basic plot: Peladon's King wants to take Peladon into 'The Federation' but Hepesh, the High Priest is a stickler for the old ways & fears that the Federation will bring destruction to their traditional way of life. He gangs up with...well he sets about disrupting the process.

The delegates from The Federation are a couple of Ice Warriors, a medusa's head in a fish tank (Arcturus) & Alpha Centuri. I won't describe Alpha Centuri but suffice it to say that Lennie Mayne, director of 'Curse', made a pretty accurate statement about how she/he/it looks. It is, after all, a hermaphrodite hexapod with a highly excitable nature.

The Doctor & Jo are mistaken for the delegates from Earth & get busy trying to stop disaster befalling Peladon.

It's all rather charming. It is also Jo Grant's best story so far. She gets to hang with the King (who clearly takes a bit of a fancy to her) & the scenes between her & King Peladon (played nicely by David Troughton) are fabulous as she pushes him to be the 'modern King' he so wants to be. She gets to ruin another of the Doctor's little plans to, at least temporarily. Katy Manning is brilliant in this story.

The script also nicely plays with our expectations of the Ice Warriors. Based on previous stories it is easy to think they're the villains of the piece, something the Doctor (uncharacteristically perhaps) does himself but they're actually on the side of the angels.

I should also add that I have a soft spot for the Doctor's Venusian lullaby for reasons I can't properly articulate. I think it might be because it is so sweetly silly. I start a campaign here & now for it to feature in New Who.

The odd thing that this story feels like one I like because it was one of my childhood memories & that my judgement is dangerously nostalgic. I do, as I said, have a soft spot for this story but I can't have seen it until I was 16 or 17 so I don't quite know why I feel that way.

Perhaps it is because, despite the absence of UNIT, it feels like the most Pertwee of Pertwee stories.