CLASSIC DOCTOR WHO ON BRITBOX – The Sea Devils 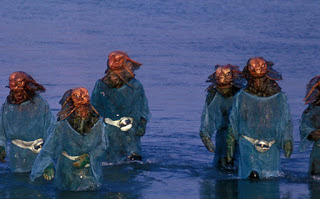 On 26th December 2019, 627 pieces of Classic Doctor Who content were made available to Britbox subscribers. Every Sunday in 2020, our Doctor Who expert, Tony Cross, looks back at some of the classic stories. Here is the Third Doctor adventure The Sea Devils...

Ah...The Sea Devils with its electronic score. I remember the first time I watched this, with a gang of non-Doctor Who fans, being vaguely annoyed by the music. It seemed weirdly inappropriate.

This time round though I loved Malcolm Clarke's music. It seemed to add an extra layer of atmosphere to the story, which was nice. It still sounds like nothing else around at the time (as far as I'm aware) but I think that makes it all the more wonderful.

The Sea Devils themselves look pretty good, although there's a scene in the last episode where they stand around for a bit looking like their posing for a holiday snap or an album cover. They are kept nicely in the background for the first episode as the tension builds & the director does a good job - especially in the end battle scenes to make it look like there are a lot of them. Their screams when in pain or fear also add a certain truthfulness to proceedings.

They are the aquatic cousins of the Silurians from Season 7 & much of the plot is similar to that story. The Sea Devils - not the name they give themselves btw - want to revive their race & take back planet Earth from the apes with attitude that have taken over. The humans want to destroy the threat. The Doctor tries to find a peaceful solution.

Unfortunately The Doctor is up against an added complication: The Master's back. The Master's supposed to be in prison but being a devious sort, he's managed to persuade his jailer Colonel Trenchard to let him have a freedom of a kind by blagging him into believing that Great Britain is threatened by spies. Trenchard is one of two civil service blowhards in this story, the other being Walker, the PPC from the Ministry. Trenchard though, on seeing the Master has fooled him, at least gets to go out in a blaze of glory.

Walker is imho a real negative in this story. Even by the standards of the Third Doctor's era this is a civil servant of epic cowardice, stupidity & pomposity. His desire for food & tea at every opportunity is irritating & I'm not a big fan of Martin Boddey's performance either. He's just TOO dislikeable & too stupid. He also seems to have an incredible amount of power, even for a PPC & no one seems to be bothered about checking his credentials.

This time there's no UNIT but the British Navy. The story is helped by the support the Royal Navy gave to the production team, so everything seems to have more heft. The Navy attack in the final episode is quite convincing because it is carried out by real military types. They look like they know how to fire a gun - unlike some of the actors playing Trenchard's security team. There are scenes at sea & Pertwee being ex-Navy looks right at home. (There's a little moment where Pertwee's about to depart in the submersible where his short line: "Yes Chief" is delivered with casual correctness.)

It's a bit padded being a six parter. I'm concluding (as I think production teams do in the end) that the four parter is the ideal size for a Doctor Who story. You don't have to stretch credulity quite so much or fill in time.

The Master, of course, needs the Doctor's help (both with a machine & to escape after The Sea Devil's lock him up with the Doctor at the end) & he can't quite kill the Doctor (again). When The Master escapes at the end The Doctor almost looks pleased for him. It's all quite civilised, again. I'm sticking to my guns: they're playing a game. This isn't for real. (Hey, it's my pet theory & I'm sticking to it)