CLASSIC DOCTOR WHO ON BRITBOX – The Mutants 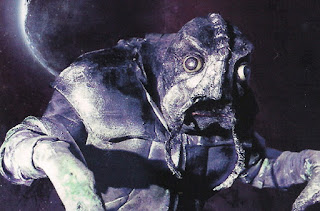 On 26th December 2019, 627 pieces of Classic Doctor Who content were made available to Britbox subscribers. Every Sunday in 2020, our Doctor Who expert, Tony Cross, looks back at some of the classic stories. Here is the Third Doctor adventure The Mutants...

This is a story trying to say some interesting things about colonialisation & race but doesn't quite pull it off. It's more a fault of the direction & production than the script I think.

The story starts with an unintentional tribute to Michael Palin's 'It's' man, which doesn't bode well but we are introduced to our lead villain, The Marshall (Paul Whitsun-Jones) & Stubbs (Christopher Coll) & Cotton (Rick James), two Guards who bored with this colonisation lark. They'll end up on the Doctor's side, eventually.

The Marshall has come down from Skybase, which is orbits above Solos, to hunt down a 'Mutt'. Solos is an Earth colony on the brink of independence, something which the Marshall - a chubby colonialist of the old school - doesn't want. He's in cahoots with Jaeger(George Pravda), a scientist bent on turning the atmosphere of Solos into a more Earth friendly one.

Into this situation walks the Doctor & Jo Grant on a mission for the Timelords who want a package delivered. Why they have to go through such ridiculous lengths - not even telling the Doctor who it should be delivered to - is a wee bit of a mystery.

Our heroes become quite a gang: The Doctor, Jo, Stubbs, Cotton & Ky. Ky(Garrick Hagan) is a native of Solos given to political rants at the drop of a hat. The only other Solosians we see are Varan & his gang of Warriors. Varan hates Ky. Ky thinks Varan is a quisling. Varan gets used by the Marshall. The Marshall kills Varan's son. Varan turns against the Marshall & it all goes horribly wrong.

One interesting thing about the Letts/Dicks era is that the future Earth doesn't sound like a sf paradise.

You can believe that the future Earth Empire of 'The Mutants' is the same one as 'The Colony in Space'. Earth is exhausted, as Geoffrey Palmer's Administrator, says in the brief few minutes of screen time he gets before the Marshall bumps him off. The Earth of the 30th century is 'grey' as the Doctor explains to Jo. It's a world wrecked by industrialisation & over-population. The Letts/Dicks future might have Earth Empires & space exploration but it isn't bright. It's ugly, dirty & destructive. In between the lines Letts seems to be trying to make important points about environmentalism, which aren't particularly loudly preached but are background whispers in a lot of the stories of this era. There's politics in the Pertwee era.

What lets the story down is that it is too long & padded & has far too many bad performances in it. Whilst Rick James' performance as Cotton is legendarily bad he isn't the only one. Pravda's poor & struggles to get half his lines out; Garrick Hagan & Katy Manning also put in performances of varying dodginess. Katy Manning seems to have gone downhill since The Curse of Peladon. She's trying so hard it hurts. I'm not sure whether Paul Witsun-Jones' Marshall is good or not. He just doesn't quite look right as a man of the 30th century. It's miscasting I think rather than bad acting.

This all contributes to dragging the story down despite good ideas.

The Mutant costumes look pretty good. The scenes in the caves are all atmospheric enough. I like the fact that everyone from Earth seems to have a different accent: this is the first time I can remember Northerners in the future in a Doctor Who story.

In the end though it doesn't work despite being a story with ambitions. It's too long, too padded & there are too many bad performances let this one down more than anything else. It's not quite as terrible as I remembered it but I'm afraid it's not great for 'The Mutants'.

Good ideas, must do better with the realisation.