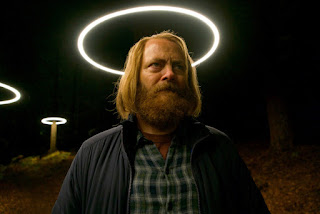 With major spoilers if you haven't binge-watched all of it on BBC iPlayer yet, Marc Nash delves into Devs...

So Alex Garland, he of The Beach, Ex-Machina et al, has penned an 8-part scifi series for the BBC. Set in the world of quantum computing, Nick Offerman’s character Forest oversees a secret development lab (hence ‘Devs’), ably assisted by Zach Grenier’s attack dog security agent Kenton and Alison Pill’s brainiac Igor-like character Katie. When a Russian espionage agent tries to steal some of the code, a chain of events is set off, with the agent’s unwitting girlfriend Lily, played by Sonoya Mizuno, at the forefront of the action.

Let’s begin with the series’ strengths. This is a creditable and credible treatise on the nature of the quantum universe, with a few concise but coherent speeches explaining this strange science to us the viewer. It broadens out into a meditation on existence, being, life and free will with, towards the end, a nice moment of a small victory for Art over Science for possession of the soul of man; thus betraying Garland’s perspective of a literary author, but a welcome one all the same amongst the mindscape of the Nerds. The second positive is the absolutely gorgeousness of the visuals. The lab is set in a sort of Buddhist or Taoist garden, albeit with a giant statue, not of the Buddha, but of a doll-like young girl and is suitably discomfiting each time it appears on screen. The representation of the quantum world itself is also striking, a mixture of white noise interference with gold ribbons. And finally, there are the performances of the main players which squeeze out the maximum from their characters, which are written with major prescriptions (ie they’re all bonkers or psychos). Offerman, with the monotone of a Matrix Sam Neill and the look of Jeff Bridges’ The Dude, represents a soft-spoken hippie who will stop at nothing to realise his pet project. Alison Pill plays her monotonic role as part cult follower, part smug psychotherapist and perhaps scoops the acting honours over all. At least Zach Grenier’s menace is overt and beyond ambiguity.

So what are the problems? The first and major one is that a tech devoted to effectively time travel both forward and back, is diverted by Forest to bring to life the memory of his dead daughter. Now this is a trope that has already become old hat, seen recently in Humans and the first two series of Westworld. Resurrecting your loved ones is a cheap and easy sentiment and in my opinion, one too flimsy to build a heavyweight emotional narrative around. There’s really nowhere to go with it, do we celebrate at Forest’s glimpses of success, or do we just shake our heads sadly? That’s not to say there aren’t also some interesting ideas thrown up about the ability to travel back to hear Jesus preach, or to see what’s going to happen in one minute’s time (the posited current limit of the quantum tech), because the computer has calculated to a precise degree what the outcome will be, so that in effect we have no free will at all. But the sections where Forest is communing in thought with images of his daughter are risible. We get one episode opening with an extended soft focus flashback, with a frisbee game between father and daughter and daughter plucking some dandelions and placing them on the chins of her parents dozing alfresco, all set to some winsome 60s soundtrack. Ugh, pass me the sick bucket. No not that one, that’s the hackneyed cliche spittoon.

We start the drama off in a state of combat as Lily takes on the Lab’s management trying to establish the truth of the fate of her boyfriend and Kenton prowls around dishing out his brand of deterrence-cum-justice. But then, by the middle of the series, hostilities have effectively ceased, as we get the ridiculous episode 7, an elongated ‘but before I kill you Mr Bond, let me tell you my plans’, without anyone having a gun or a trapdoor into a shark pool to hand. And with the twist that the two men involved are having a discussion about love and emotion, while the two women are discussing high level science. And then, while the women prattle on about the deterministic universe, the guys go out to play frisbee! When the ‘confrontation’ quest for truth is over, the two scientists retire to bed and discuss the merits of the couple who just doorstepped them, as if they’re proud parents. Then they make their broken declarations of love to one another by using the line “I am in like with you”. Nerds do not come out looking good from this show. The whole tonal shift is clunky and ultimately unsatisfying.

As we bumble towards the great reveal (there can’t be any spoilers since this is a multiverse with several different possible ‘endings’), we lapse into standard Groundhog Day v Inception / Source Code concepts of existence, lacking any real new insights. The power of quantum reality is depleted and shrunk to just that of a high quality SIM, which is really disappointing. I preferred the days when we used to call it R&D rather than devs.