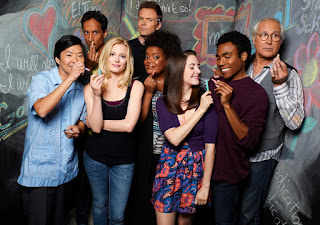 Community is now on Netflix and Steve Taylor-Bryant remembers how he came to the show, why he loved it, and how he ended up really disappointed...

My good pal and friend of the site, Nate McKenzie, got me into Community. For some reason, probably work or having far too many children, I had missed this slice of American sit-com on first transmission. I bought a box set of the DVDs because, to be fair, Nate has never steered me wrong, and for three seasons I watched an almost too clever for its own good comedy that trod a fine line between offensive and brilliance. I will get to later seasons in due course, I am not the kind of fan that forgives bad writing and will probably rant about season four, but for the first three years Community was exactly what I had been looking for in a television show.

Created by Dan Harmon (Rick and Morty) Community revolves around a study group in Greendale Community college. Jeff Winger (Joel McHale) is a disgraced lawyer who had lied about having a law degree and was punished by having to stay at college and get the course credits required to get his law licence (think Suits but in a sitcom). As in life, though Jeff doesn’t want to work, he decides he wants to cruise, taking blow-off courses that will involve no study. He meets a blonde girl and is determined to woo her. Britta Perry (Gillian Jacobs) is a woman who is maybe not that smart but doesn’t quite slip into dumb blonde territory and keeps Jeff at bay for the most part. They are taking Spanish 101 taught by an Asian teacher, Chang (Ken Jeong), and decide to start a study group mainly so Jeff can spend more time with Britta. In the group are Shirley (Yvette Nicole Brown), a divorced mother of two and staunch Christian church goer, Annie (Alison Brie), an intense young girl that puts far too much pressure on herself and is a recovering addict who had a nervous breakdown in High School, a school she went to with Troy (Donald Glover) a High School football hero who due to injury couldn’t go to a decent school on a scholarship. Troy has an unbreakable bond with pop-culture nerd Abed (Danny Pudi) who lives life through television and film and uses pop culture to live life as his special needs don’t allow him to react as a normal human being. Rounding out the group is Pierce Hawthorne (Chevy Chase), a millionaire businessman and misogynist and racist who just can’t stop offending people, think Fox News as a human being. Throughout the seasons the study group become this sort of dysfunctional family that constantly hurt each other by trying to help each other and along with the worst Dean in education (Jim Rash) situations arrive and evolve throughout the school year that need the study group in one way or another to save the day.

The first three seasons were pretty strong, surreal and sentimental, not hiding how much it is spoofing other things, but clever and funny and that is down to some fine writing and the chemistry amongst the core cast as a group and when they break off into smaller teams. The best of the chemistry on show is undeniably between Glover and Pudi as Troy and Abed, whose life of pop culture would make a spin show more successful than any other spin off. Troy and Abed in the Morning are genuinely better than the closing credits segments they get and as the seasons grow so do the storylines that the two stars have, to the point where there is a college civil war playing out between Abed’s pillow fort community and Troy’s blanket fort society and I was genuinely torn as to whose side I was on, and upset that Troy and Abed had put me in that position. Community’s first three seasons (now on Netflix) are worth watching for just them. As the show went on though I became bored with the antics of Pierce and began to see that what had annoyed me about Chevy Chase all those years ago had started to bleed through. Then, behind the scenes, there was the tension between Chase and Harmon, leading to Harmon being fired and Chase being killed off and without the dignity of it being on screen. Season four was mercifully shorter than the other seasons, it wasn’t anywhere near as funny because what they were doing was too obvious. Community had worked to that point because it was unapologetically niche and didn’t pander to any member of the audience who may not get the joke, whereas season four just trod the water of mediocrity, forgetting what it had been about. A long running element of the show that became a real-life campaign was the ‘Six Seasons and a movie’ one from Abed. As Community was struggling to impress its Network chiefs each season its fans were jumping on the six seasons band wagon and I was shouting ‘be careful what you wish for’.

The show returned though and got its six seasons but, with regular cast members disappearing, the standards dropped. It was that chemistry and fine line writing of the early seasons that made Community the epic sit-com it was. Those final seasons are still humorous, but they are just normal levels of funny and it makes me wish for what could have been. Get on Netflix and watch the first three seasons though, in these dark times it will truly help you.

I am very tired and am aware that sometimes I do not make any sense. This video explains what went wrong with Community better than I have.