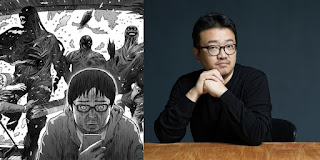 Netflix has announced that it will produce a new Korean original series Hellbound, which will be directed by Yeon Sang-ho, best known for his box office hit Train to Busan...

In Hellbound (working title), supernatural beings appear out of nowhere to condemn people to hell. It doesn’t matter whether these events are a blessing or a curse: a new religious group is interpreting them all as the will of the divine. What unfolds through this predicament is an intense and highly-charged story about people who must survive under conditions of utter social chaos. The story was originally published as a webtoon, titled Hell or 지옥 in Korean, and has garnered a great deal of attention and acclaim. As a Netflix original series, Hellbound will take on a new form through the collaborative work of director Yeon Sang-ho and illustrator Choi Gyu-seok, the author of Songgot, a webtoon that was adapted as a television drama in 2015.

Yeon and Choi will together spearhead Hell (or 지옥)’s transformation from a webtoon into a Netflix original series. The duo will join forces on the script, while Yeon will also direct the production, in order to expand Hellbound upon the themes and views introduced in the webtoon. Choi is expected to exhibit his insight into social issues the way he did in Songgot. Besides his globally acclaimed 2016 film Train to Busan, Yeon Sang-ho has directed its sequel Peninsula, which will be released in Korean theaters in the coming months. Yeon also worked as the scriptwriter for The Cursed, a recent Korean TV drama series produced by Lezhin Studio.

Hellbound, produced by Lezhin Studio, will be available only on Netflix.