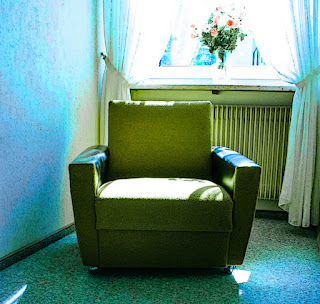 Lockdown can be hard on people and Steve Taylor-Bryant is no different. So how is he feeling and how is he coping? Well, we couldn't stop him telling you (and we tried)...

Despite being classed as a keyworker, I am a supermarket butcher and fishmonger by trade, I have been off work for seventeen years now. Okay it's only five weeks thus far but trust me it feels longer. I have three ‘at risk’ from Covid-19 people in my household. My brother in law is also at risk, and my parents are so old they remember the Black Plague, so they are also locked in their homes and I am responsible for feeding and watering them. Being relied upon for anything is a new experience for me, those who know me well will tell you that they would rather be ill than have to rely on me to do something right/loving/serious/vital/on time, but here we are, I have all the power and they are little people awaiting their food delivery from yours truly. Not all the power, at some point this lockdown is going to end and I am going to have to find someway to outrun my mother if she has read any of the above but my point? Yes, I had a point… Hold on, it is here somewhere, oh yes there it is… the point is that not being ready to be relied upon and then having to step up is tiring. I really do not mind caring for my loved ones, I am happy to be the one leaving the house and making sure they are all safe and obviously a lot of my intro in jest but I am not the family member that is usually called upon for such tasks and that does take a toll because being grown up and responsible is hard work, I don’t like it. But the point? Yes, I am getting there I promise…

My point is that other things have gone by the wayside as I take the ‘keeping everyone alive’ thing seriously. My To Be Read pile is untouched as I am currently reading things I know and am familiar with as I need that comfort, my television habits have changed as I am rewatching things I know I like, that entertained me before and can be sought out to entertain me again, and I am not watching new films for the same reasons. When you write for a review-based website however this can be an issue. I have an editor needing copy, readers at home with nothing better to do than read my gems of wisdom (yes, I am that egotistical, get over it) and nothing new to say because it turns out I am a regular human just doing his best to get through an unprecedented worldwide freak-out of biblical levels without breaking his own head. That is why there is very little new from me in the way of gems. I am just barely getting through days at the moment. I have children to home-school, dogs to exercise, family to feed and care for, a friend's passing to mourn, and I am, it appears, just a normal man. So I do apologise for not having anything new for you, this time it is kind of not my fault, but the things that are bringing comfort during the end of days may also help you, so here they are listed below for you seek out if you need something. Stay safe, stay indoors, wash your hands, do not lick the letterbox (there is someone out there that needs that instruction and if you do not believe me watch the news, there are idiots everywhere). 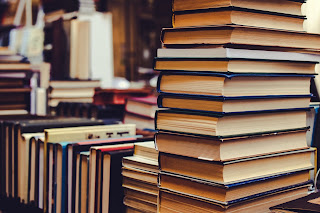 I love non-fiction more than fiction but am reading one of each type at a time and finding that I am enjoying a break from reality by taking something so ridiculous and unbelievable and trying to make sense of it. I am also reading fiction. Here are a few books that I have thoroughly enjoyed in the last few weeks and that you may also get something from. 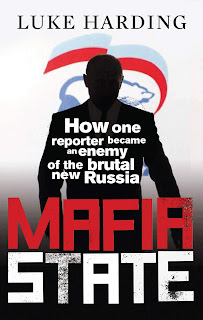 I read mainly books about hacking, leaks, or American politics but I also enjoy books written by journalists that are journalists that do journalism and in depth reporting, that try hard to get multiple sources or are in some aspect the source themselves due to events they are living through, I cannot stand clickbait shit. One journalist whose books I have enjoyed is Luke Harding who was the Moscow Correspondent for The Guardian a few years ago. His personal story of his treatment by the FSB makes for excellent reading and is almost a modern day cold war espionage thriller, except for the fact it all really happened, and his book that traces the movement of money around and out of Russia is fascinating. Give these two titles a go, you will not regret it…

Mafia State: How One Reporter Became an Enemy of the Brutal New Russia

A couple of other non-fiction books that garnered good stars from me on Goodreads were an in depth analysis of Matt Smith’s first season of Doctor Who, breaking down each episode in a chapter and deep diving into symbolism and storytelling techniques, and a book on politics in Hollywood over the course of a century taking specific stars and explaining the how’s the whys and wherefores of their political journeys either side of the aisle. They are these books… 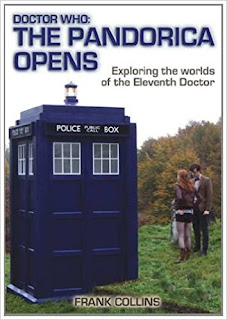 Doctor Who: The Pandorica Opens: Exploring the Worlds of the Eleventh Doctor by the incredible Frank Collins whose work I adore whether it’s a book or a tv review, or even a tweet where he unlocks something in me that allows me to understand something in greater depth.

Hollywood Left and Right: How Movie Stars Shaped American Politics by Steven J. Ross which explores actors as individuals but also how the medium effects the politics of its day and vice versa. 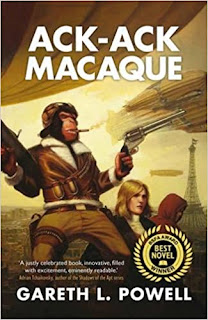 After enjoying the Embers of War Trilogy by Gareth L. Powell and finding his imagination to be something to aspire too, I bought the trilogy of books about a sentient monkey who journeys with his human friends saving the world many times over. It honestly sounds daft but the three novels, Ack-Ack Macaque, Hive Monkey, and Macaque Attack! are stunning beyond belief. Three novels that show humanity and their best and worst wrapped up in some top-notch dystopia and incredible science fiction. I laughed, I was hooked, I was on an emotional roller coaster for all three novels and I think I can firmly say that Gareth L. Powell is a favourite author of mine. 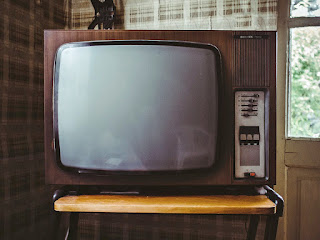 I often lose my myself in TV, I like the short form serial format as much as a longer story arc and can find pleasure in a miniseries as I can in a full UK or US season. With the way my mind is at the moment though I struggle to concentrate for periods of time and so in my visual treats I find watching shows I know well are the only way I can feel both fulfilled and actually get to the end of something so here are the TV shows that are helping me get through the long nights of Lockdown2020 when my daily chores are completed and all my family members are still breathing. 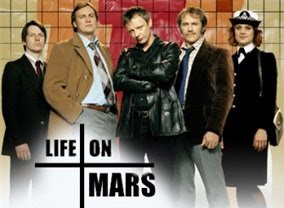 Life on Mars tells the fictional story of Sam Tyler (John Simm), a policeman in service with the Greater Manchester Police (GMP). After being hit by a car in 2006, Tyler awakens in 1973 to find himself working for a predecessor of the GMP, the Manchester and Salford Police, at the same station and location as in 2006. 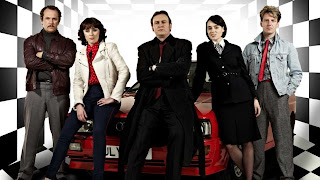 In 2008, Alex Drake, a female officer with London's Metropolitan Police, is shot. When she regains consciousness, she finds herself in the 1980s -- and is shocked to meet DCI Gene Hunt (the character featured in `Life on Mars'), an officer she has heard of largely through her research. 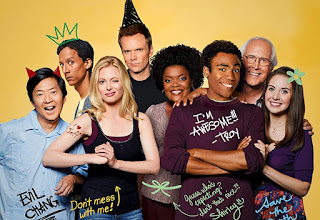 A lawyer, whose law degree has been revoked, is compelled to join the Greendale Community College. Students of diverse temperaments join his study group which leads to quirky and memorable encounters. 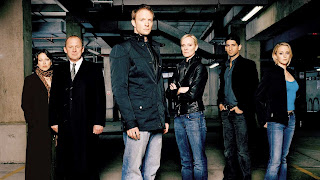 A team of agents in the British security intelligence service work to protect the U.K. from terrorists and other threats to national security. A repackaged version of the BBC series "Spooks," "MI-5" follows a counterterrorism unit based in the highly secure suite of offices called The Grid, where Harry Pearce oversees the team and deals with the often dirty politics of the spy game. 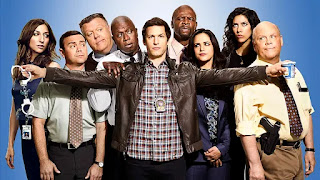 Captain Ray Holt takes over Brooklyn's 99th precinct, which includes Detective Jake Peralta, a talented but carefree detective who is used to doing whatever he wants. The other employees of the 99th precinct include Detective Amy Santiago, Jake's over achieving and competitive partner; Detective Rosa Diaz, a tough and kept to herself co-worker; Detective Charles Boyle, Jake's best friend who also has crush on Rosa; Detective Sergeant Terry Jeffords, who was recently taken off the field after the birth of his twin girls; and Gina Linetti, the precinct's sarcastic administrator. 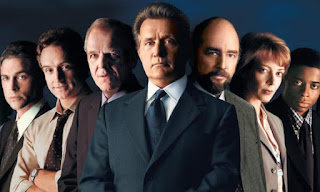 The West Wing - read ALL of Steve's West Wing articles

Cutthroat presidential advisers get their personal lives hopelessly tangled up with professional duties as they try to conduct the business of running a country. Fictional Democratic President Josiah "Jed" Bartlet suffers no fools, and that policy alienates many. He and his dedicated staffers struggle to balance the needs of the country with the political realities of Washington, D.C., working through two presidential terms that include countless scandals, threats and political scuffles, as well as the race to succeed Bartlet as the leader of the free world.

So, there we go, a few things that are keeping me relatively sane during a period of insanity like no other and I lived through the 80’s. Maybe you will find peace and solace in some of my suggestions, maybe you’ll just ignore and do your own thing which is completely cool by me, or maybe you will side with my mother and start plotting revenge upon me after the lockdown is lifted and do you know what? I would not blame you. I would be easy to catch as I am basically sat on a couch watching TV and eating doughnuts for a living. Sorry boss.