CLASSIC DOCTOR WHO ON BRITBOX – The Ark in Space 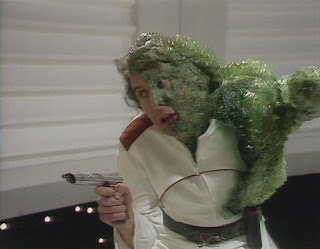 On 26th December 2019, 627 pieces of Classic Doctor Who content were made available to Britbox subscribers. Every Sunday in 2020, our Doctor Who expert, Tony Cross, looks back at some of the classic stories. Here is the Fourth Doctor adventure The Ark in Space...

In which Harry's unfortunate twisting of the TARDIS's Helmic Regulator leads to a landing inside a 30th century space station and there's something horrible going on...

The Ark in Space is nicely paced with the tension building steadily towards the final moments.

The Wirrn - and their plan - is quite horrible, although rather surprisingly they're given a legitimate reason to hate mankind. Noah's gradual transformation from man to Wirrn is played dead straight and is all the more unpleasant for it. I like the guest casts performances, although only Noah (Kenton Moore), Vira (Wendy Williams) and Rogin (Richardson Morgan) get more than a few lines and an unpleasant death.

This new production team seem to be working towards something aimed at an older audience than the Letts-Dicks team. It's a gradual process and this could still - almost - be a Third Doctor story in basic format. The balance between dark and light; scary and comedy seems to be shifting a little though. I suspect the Doctor's line about Dune's knowledge having been 'fully digested' would not have slipped past Letts-Dicks.

The sets look great with the pallets containing the cryogenic sleepers particularly effective and the scale of the Ark is hinted at through glimpses of further rooms around corners.

The Wirrn, who are basically the space equivalent of the wasps that lay their eggs inside other insects thus giving their children something to fest on, have snuck aboard the Ark whilst its inhabitants are asleep, waiting out eternity, as the Doctor puts it. The humans have fled to the Ark to survive solar flares. The Wirrn have also been driven from their home world but by Earth colonists and the Ark is there chance to absorb the human race and their knowledge as a diet based form of revenge.

The Ark is supposed to contain the best of the human race but the first few Ark inhabitants are all white, so perhaps it's not the whole human race after all. Or are the non-whites waiting to be woken later.

Interestingly if this had been a 60s story, I think there would have been at least one black actor, probably playing Lycett but oddly not in this 1974 story. I think the 'Race Against Time' documentary on 'The Mutants' explains why that might be better than I can and perhaps I'd have not noticed it quite so much if it hadn't been for watching that documentary recently. It certainly had never occurred to me on previous viewings.

The Doctor, Sarah and Harry arrive on the Ark to find it non-functional. Poor old Sarah almost suffocates before the Doctor gets everything repaired. Then whilst the Doctor and Harry are distracted by a lampshade with an attitude, Sarah is transported, lectured to and cryogenically frozen. If it's not one thing, it's another for poor, old Sarah.

The Doctor and Harry find their way to the pallets where humanity is stored and discover Sarah is there and the revivification process has begun. The first out is Vira, Med Tech One. Then Noah. Vira's quite nice to the TARDIS gang but Noah goes into threaten-gun-suspicious mode. He stuns the Doctor, who’s only trying to help and then makes the mistake of going down into the Solar Stack wherein lurks a fat Wirrn grub. The Wirrn strikes Noah, which starts the process of turning him into a Wirrn.

It's all downhill for Noah then. His hand goes to green bubble wrap, his mind is at war with itself as Wirrn takes on Human and he's gradually changing. This is played with terrifying sincerity by Kenton More. This is proper body horror.

The rest of the story is the Doctor's battle to save the Ark's inhabitants from being Wirrn lunch and the battle between Human Noah and Wirrn Noah.

In the end the Wirrn are distracted and defeated, partly by the Doctor and partly by the remaining humanity of Noah who seems to sacrifice himself in order to take out all the Wirrn. It's an upbeat ending, proving the Doctor's point about the indomitably of humanity.

There's a couple of quibbles: the direction is a bit odd, with strange jumps that don't make what's happened obvious; the adult Wirrn don't work as well as the grubs or the half-Noah, half-Wirrn. It's a combination of their lack of animation and dodgy limbs.

It flies by in terms of pacing and Tom's excellent in it: whether its eulogising about mankind at one point or mocking Harry's stupidity the next. Both Ian Marter and Liz Sladen are up to their usual standards but it is pretty obvious that Harry's not got enough to do already, so is often reduced to standing about being lightly patronising, although I do like his attempts at getting Sarah to be stiff-upper lipped about the Doctor's (apparent) death.

Overall a good story, although perhaps not quite the classic I remembered it to be.