CLASSIC DOCTOR WHO ON BRITBOX – The Sontaran Experiment 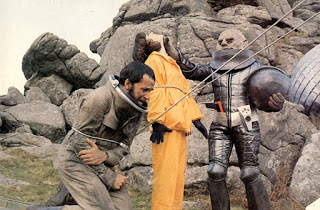 On 26th December 2019, 627 pieces of Classic Doctor Who content were made available to Britbox subscribers. Every Sunday in 2020, our Doctor Who expert, Tony Cross, looks back at some of the classic stories. Here is the Fourth Doctor adventure The Sontaran Experiment...

There's not much to say about the Sontaran Experiment really. It whips by in two quick episodes and is gone before you can blink.

The Doctor, Sarah and Harry beam down from The Ark (or Nerva as everyone is now taking to calling it) to the abandoned Earth. There the Doctor sets about repairing the transmat, whilst he sends Sarah and Harry off to explore.

The abandoned Earth turns out not to be quite as abandoned as all that. Not only is there a gang of South African space colonists but there's a mysterious Robot to. Oh, and Styre, a Sontaran. He's conducting an experiment on our South African friends to test the limits of human endurance and to find their weaknesses before the Sontarans launch an invasion.

The Doctor stops him.

Whilst making this story Tom Baker broke his collar bone so in a lot of shots his stunt double Terry Walsh is playing the Doctor. Unfortunately, it is pretty obvious a lot of the time, which is a tad distracting.

Styre's robot too, which goes around collecting assorted South Africans to experiment on, looks pretty rubbish: a big silver box on rather precarious legs. It seems to have come from the same civilisation that created the Smash Mash robots* and was apparently strapped to the top of a car so that it could be seen to move. (The details of Doctor Who stories I seem to have stuck in my head, it's quite bizarre)

Harry's excellent in this, perhaps because Tom's incapacitated he gets to do get a bit more involved in the action and his anger when he thinks both Sarah and the Doctor are dead and he sets off to get Styre is lovely.

I'm not sure I like Sarah in this story. She's borderline hysterical half the time and bullies - and there's no other word I can use really - Roth (Peter Rutherford) into guiding her around even though he's clearly terrified as a result of torture. Rutherford puts in a pretty good performance to. This is a man that can't take much more but Sarah still feels it's fine to get him to help her so that when they are eventually captured his terror leads him to flee and Styre murders him. It just doesn't seem right or particularly in character for Sarah.

Yes, I'm aware that some of Sarah's hysteria is generated by being terrified in a deliberate experiment by Styre but I still think it's not one of Sarah's best stories.

Basically it isn't really a story in its own right but the last two parts of a 'The Ark in Space', as well as providing a link in to both the next story, 'Genesis of the Daleks' and the final story of Tom's first season 'Revenge of the Cybermen'.

It's another of those not bad, not good stories. Distinctly average.

* Here's a Smash Mash robot in action, just in case you're too young to remember: