CLASSIC DOCTOR WHO ON BRITBOX – Genesis of the Daleks 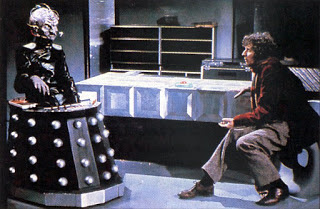 On 26th December 2019, 627 pieces of Classic Doctor Who content were made available to Britbox subscribers. Every Sunday in 2020, our Doctor Who expert, Tony Cross, looks back at some of the classic stories. Here is the Fourth Doctor adventure Genesis of the Daleks...

Genesis of the Daleks is an excellent story. Dramatic, dark and centred on two excellent performances: Tom Baker's Doctor and Michael Wisher's Davros.

I feel I might have been holding back my enthusiasm for some of these stories because of my Tom Baker nostalgia but I genuinely think this is the first story in his first season that feels like HIS. He's magnificent. But in truth Genesis is the Michael Wisher show.

Despite being encased in a rubber mask his Davros is intelligent, ruthless, obsessed, insane, charming and totally terrifying. You know that Davros would sacrifice everything and everyone so he could be 'set amongst the Gods' and he pretty much does.

The scene where he discusses whether he would release a virus he had created that would destroy everything else in creation is justly referenced as a 'classic' but there's so many other fantastic moments: the way he sneers when pronouncing the word 'democracy' in the final episode; his meeting with the Thals and the way, right at the end, when he knows that his creations have turned against him he can't quite bring himself to press the destruct button.

Only Roger Delgado and Kevin Stoney have created villains with the heft of Michael Wisher in Genesis. It's a performance to be savoured.

The story itself is simple enough: The Doctor, Sarah and Harry are 'grabbed' by the Timelords who wish to avert the creation of the Daleks. The Doctor is the agent they have selected. They are on Skaro at the rotten end of a thousand-year war between the Thals and Kaleds. After being split up, captured, re-captured and escaping again the TARDIS team have seen Davros's steady climb to supreme power in the course of which he happily destroys his own people every time they oppose him.

Davros's experiments have shown that the ultimate form of the Kaled people is a terrible blob type mutation. The Daleks are his response and he loses all interest in the Kaled's present. They can be sacrificed to ensure the survival of his Daleks but his obsession with their survival means that he is creating a monster. A monster that will bring Davros's own destruction. The monsters will kill their creator.

He seems to have one main ally throughout the story. The magnificently nasty Nyder, played by Peter Miles. Almost everyone else 'betrays' Davros.

Every action of the Doctor's seems to force Davros to further acts of terror. The Doctor convinces the Kaled government to halt Davros's experiments and Davros wipes out the entire Kaled dome. It's as if by trying to change history the Doctor is just forcing it along faster, although at the end he suggests that he's delayed them by perhaps a thousand years.

There are a couple of quibbles. Firstly, whose idea was the killer giant clams? All credit to Ian Marter, Tom Baker and Liz Sladen for being able to act their terror at these...mutated shellfish convincingly. Ian Marter's particularly good when it looks like one of them is going to eat him alive.

Secondly, it's always been obvious that the Daleks are a sf version of the Nazis but sometimes in Genesis the parallel is hammered home with all the subtlety of a politician's speech.

Thirdly Sarah's 'bullying' of the Doctor when he's making his 'Do I have the right' speech. He's agonising over the possibility of committing genocide but Sarah's trying to make him do it. Like her bullying of poor post-traumatic Roth in the Sontaran Experiment it just doesn't feel right.

Also if truth be told like all six parters it has its moments of padding but don't let my quibbles put you off. This is one of those Classic Doctor Who stories that I'd recommend to anyone. If you want to see Doctor Who approaching, it's best then Genesis of the Daleks will do the job.