CLASSIC DOCTOR WHO ON BRITBOX – Carnival of Monsters 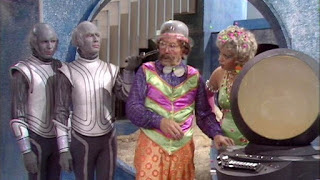 On 26th December 2019, 627 pieces of Classic Doctor Who content were made available to Britbox subscribers. Every Sunday in 2020, our Doctor Who expert, Tony Cross, looks back at some of the classic stories. Here is the Third Doctor adventure Carnival of Monsters...

Another four parter & by Jove they rush by in comparison with some of the recent six parters. It's quite fun this, if a little weightless.

The Doctor, his ability to hop about the universe restored by grateful Time Lords (& probably a grateful production team) at the end of the 'Three Doctors' is supposed to be taking Jo to Metabelis Three but materialises on board what appears to be a ship making its way to Bombay. The Doctor's not convinced it is Earth - although Jo just thinks he's covering for his mistake. However, the Doctor turns out to be right. The passengers & crew of the SS Bernice repeat the same behaviour over & over again & then the Doctor notices a rather bizarre addition to the floor...it turns out that they are trapped in a Miniscope.

The Doctor & Jo clamber about the insides of the machine - a quite impressive set - before stumbling across the unpleasantly carnivorous & persistent Drashigs.

Will the Doctor & Jo escape the Miniscope? Will Kalik's devious plan to over-throw his brother the President succeed? Will the Drashigs eat everyone & everything?

It's all frothy fun. The Doctor gets to do some nice moral high grounding over Miniscopes & tell us of his (& the Time Lord's) role in banning them. The scenes involving Kalik, Orum & Pletrac are all nicely played & all three actors put in lovely, fussy performances.

In fact the strength of this story is its cast. There are good performances from the crew & passengers of the SS Bernice, which includes Pertwee's mate from the Navy Lark Tenniel Evans; a pre-Harry Sullivan Ian Marter & Jenny McCracken. Leslie Dwyer & Cheryl Hall do a fine job to, especially Dwyer's playing of the moments where Vorg changes attitude mid-sentence but I think the acting prizes go to the Three Stooges: Wisher, Lodge & Halliday.

So not a hugely deep or important story but a lot of nice stuff. I've heard it suggested that this is Robert Holmes' commentary on Doctor Who itself, with Vorg's line about it being 'just entertainment...nothing political' being a highlight in this regard. Maybe it is, maybe it isn't but it feels like we've earned a bit of light-heartedness. For the record my favourite line is Vorg's: "The generators were built by the old Eternity Perpetual company. They were designed to last forever; that's why the company went bankrupt."