CLASSIC DOCTOR WHO ON BRITBOX – The Three Doctors 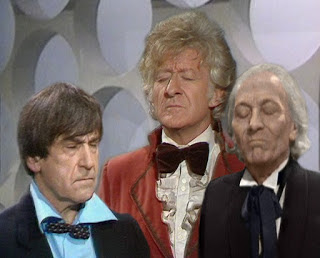 On 26th December 2019, 627 pieces of Classic Doctor Who content were made available to Britbox subscribers. Every Sunday in 2020, our Doctor Who expert, Tony Cross, looks back at some of the classic stories. Here is the Third Doctor adventure The Three Doctors...

There's no point beating about the bush. I love this story.

It's a shame Hartnell's health precluded a more active role but the real fun comes from the interaction between Troughton & Pertwee. Their differences, jealousy & point scoring is done with an excellent lightness of touch. I said in my Season 9 overview that I liked Troughton's Doctor better than Pertwee's & it’s a joy to have him slip back in the part, even if the writers give him a series of 'greatest hits' to perform.

Omega(Stephen Thorne) is a suitably majestic figure for the Doctor's to take on in their celebration. Thorne's performance is excellent because although in some ways Omega is from the bombastic shouty school of Doctor Who villainy Thorne gives him a certain amount of pathos. This is a Time Lord driven mad by loneliness & isolation. When Omega discovers that his physical body no longer exists Thorne does a heart-breaking job of conveying Omega's pain in a single, drawn out scream.

Here Omega is a villain without being classically evil. He's no Master.

Omega wants his revenge on the Time Lords - who are in a sparkling cloak phase of their development - for abandoning him in the anti-matter universe. As far as the Time Lords are concerned Omega was obliterated, as far as Omega is concerned, he should be a God.

There's some nice performances from the other guest stars: Laurie Webb (as Ollis) & Rex Robinson (as Dr Tyler). Tyler's constant scientific curiosity and enthusiasm is rather charming.

I have two quibbles with the story: one is the Gell Guards. They're too wobbly. Not in a jelly type way but in an 'inside this costume is clearly an actor with feet walking' way. The second is the way that the Brigadier is - for a chunk of the story -portrayed like a buffoon on the verge of a nervous breakdown. It's mainly in the first couple of episodes but it just feels wrong, although Nicholas Courtney does his best.

I'll almost forgive this for the nice way Courtney handles the scene where he - and the others - leave the Doctors to what looks like a fate worse than death. There's something rather moving in the way the Brigadier says goodbye to the Doctors. It's a proper stiff-upper-lip farewell. All supressed emotion, which I often think is more moving than the full on tears 'n' snot approach of the modern actor.

In the end though this does a fine job as a celebration & it is the three actors who have played the Doctor, so far, that deserve the plaudits. Splendid chaps. All of them.

I watched this again last night as a sort of palate cleanser between all the New Doctor Who I've been watching.

It's fun this, perhaps because it doesn't have huge amounts of pretentions about what it is. It's Doctor Who, it's an adventure story and that's that.

I should give a nod to John Levene as Sergeant Benton whose performance in this story is rather good and his reaction to entering the TARDIS for the first time is pretty much as genuine as you'll get.

I said in the original review that I preferred Troughton's performance to Pertwee's and I still do but there's something about Jon Pertwee's Doctor that is intensely reassuring. I know there's a lot of ticks in there: the neck rubbing etc but I find Pertwee really watchable, if that's the right word and every time I return to the Pertwee era I enjoy it, even if when I'm not watching it I don't feel that drawn to the era. It's odd.