CLASSIC DOCTOR WHO ON BRITBOX – The Time Monster 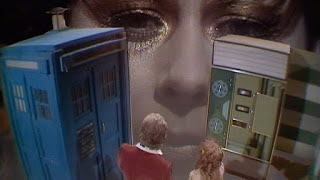 On 26th December 2019, 627 pieces of Classic Doctor Who content were made available to Britbox subscribers. Every Sunday in 2020, our Doctor Who expert, Tony Cross, looks back at some of the classic stories. Here is the Third Doctor adventure The Time Monster...

The last time I watched this story was on a dodgy VHS copy so first of all let me pay a little tribute to The Restoration Team for the work done on this - and other - DVD releases. There's a short documentary on the DVD, which covers that work on 'The Time Monster' in more detail.

What of the story itself? Well it isn't one of the best, but I don't think it is quite as bad as all that. It is definitely far too long. Huge chunks of episodes 2, 3 & 4 are nothing more than padding whilst the story dribbles along. The story itself follows the pretty bog standard Third Doctor v The Master pattern.

The Master seems to be an intergalactic Baldrick. His 'cunning plans' leave him trapped or requiring the Doctor's intervention to escape & this one, involving a mysterious creature called Chronos, ends precisely as expected. Another round of the Doctor v The Master ends with the Doctor, if not quite victorious, at least undefeated.

Oh & once again The Master has decided to hang about the Doctor's locality as part of his cunning plan. This time 'disguised' as Professor Thascolos. Once again, his alias is a little thin...apparently Thascolos means Master in Greek. I'm sorry but the Master is an idiot really & this is the maddest that Delgado's Master has appeared so far with maniacal laughter & shouty rants. However, he's still icily polite when he needs to be.

Jon Pertwee's good in this. Yes, I like the daisy-est daisy speech & Pertwee delivers it in a nicely subdued fashion. I quite like how calm the Doctor is throughout this story, it is a contrast to the Master's more frantic behaviour.

I'm still finding Jo Grant mildly annoying. People often criticise Bonnie Langford for being 'theatrical' but Katy Manning's performance as Jo has a certain amount of the same boundless energy. However, there's something about Jo that is quite likeable, which I think cancels out a little of the annoyance. She's certainly not as annoying as I found either Susan or Dodo after a while.

The supporting performances are pretty variable. The banter between Stuart (Ian Collier) & Professor Ruth Ingram (Wanda Moore) is a little strained when it is - I think - supposed to be witty & amusing. Whether that's the fault of the actors is a moot point. I think the script is to blame.

The Atlanteans are all either a bit wet or a bit doddery with the exception of Ingrid Pitt as Queen Galea. I can't avoid mentioning the Queen's rather impressive...décolletage. I'm not sure the performance is up to much though but The Master does a majestic job of seducing, corrupting & disappointing her in record time.

The Minotaur is OK, although he's dispatched a little too glibly for my liking & this is another story where a lot of people die but no one seems too bothered, which I don't feel helps.

The least effective thing is Chronos itself. I'm not sure what the director Paul Bernard was thinking but it is so clearly just a bloke flapping some wings about whilst dangling on Kirby wires. Therefore, Chronos seems as threatening as a chicken.

Credit to John Levene for some nice work in this story as Benton.

In the end this is a pretty average effort with a couple of good points dragged down by a few bad ones.