CLASSIC DOCTOR WHO ON BRITBOX – Frontier in Space 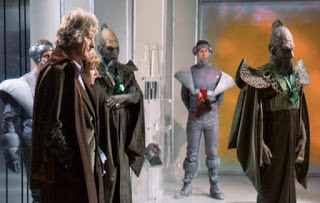 On 26th December 2019, 627 pieces of Classic Doctor Who content were made available to Britbox subscribers. Every Sunday in 2020, our Doctor Who expert, Tony Cross, looks back at some of the classic stories. Here is the Third Doctor adventure Frontier in Space...

Cor blimey they don't half drag this out. The main plot: Draconians & Earthmen are on the verge of WAR. Neither side trusts each other & keep attacking the other's spaceships...or do they? The Doctor & Jo stumble into this, realise that the true villains are Ogrons & that someone, somewhere is trying to stir up war between the two Empires. Who could it be?

The rest of the story is told in a series of escapes. The Doctor & Jo are repeatedly captured, escaped, interrogated (by people who don't believe them), re-captured & escape either alone or together. They are captured by the Earth government, The Draconians, The Ogrons, The Master & finally, in a whacking great cliff-hanger, by the Daleks. It's like a never-ending repeat.

This is the Master's last story for some time because poor old Roger Delgado is killed in a car crash whilst making a film in Turkey. Whilst he's up to his usual standards his departure in the final minutes of episode six is so badly directed & chaotic that he just...disappears. A sadly downbeat departure for an actor whose Master is - for me - the definitive performance. You can keep your Ainley’s, Pratt’s & Simm’s. I'll take Delgado.

There's not much else I can say.

The Draconians are well-designed & have a culture of their own, which makes a change. Their proud, honour bound & sexist allowing Doctor Who to throw in one of its half-arsed 'women's lib' comments, which isn't really convincing.

Michael Hawkin's plays General Williams as a man with a spoon shoved up his arse. Stiff, closed-minded & warmongering. Until, in a bizarre instantaneous turnaround, he is told by the Draconian Prince that he killed a load of unarmed Draconians to start the last Earth-Draconian War & decides he's wronged everyone. It doesn't feel right. This man, whose questioned everything as a Draconian scheme, accepts the Prince's account without a quibble?

Anyway I can't be arsed to say much else. It's a story. It passes the time & really it's just half way through a twelve part epic that concludes with 'Planet of the Daleks' but it is so padded as to be worth of a cell of its own.

Will 'Planet of the Daleks' be better?