CLASSIC DOCTOR WHO ON BRITBOX – The Green Death 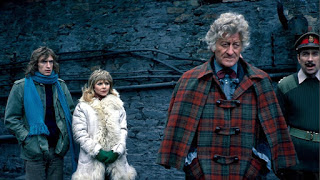 On 26th December 2019, 627 pieces of Classic Doctor Who content were made available to Britbox subscribers. Every Sunday in 2020, our Doctor Who expert, Tony Cross, looks back at some of the classic stories. Here is the Third Doctor adventure The Green Death...

After the double whammy of disappointment that is Frontier in Space & Planet of the Daleks we get something approaching a classic in The Green Death.

The Green Death is one of the handful of Classic Who story to have had an impact on the national psyche. It's 'the one with the maggots' that people of a certain age always remember.

It's six episodes so there is some padding but unlike some six parters it doesn't particularly drag. There's trouble in the valleys when a miner is found dead at the pit. He's bright green. Just the job for UNIT as the Brigadier says. Jo's already planning her own trip to Llanfairfach to see Professor Clifford Jones (Stewart Bevan), the environmentalist. The Brigadier offers her a lift. The Doctor is going to Metabelis Three.

Having hammered on about Metabelis Three so much over the last couple of stories it is amusing that when the Doctor actually gets there it turns out to be a total hell hole, if prettily blue. He does manage to nab a sapphire though before running back to the TARDIS & then to Wales.

Global Chemicals are up to no good. Dumping toxic waste in the old mine, which not only turns poor old Welsh miners bright green but is creating giant maggots. It initially looks like a plain old story of corporate greed but there's something else going on. The BOSS is planning a takeover.

The BOSS is a supercomputer linked to the brain of Stevens (Jerome Willis) head of Global Chemicals. BOSS is a one of the series all-time great voice performances by John Dearth. He manages to make the computer funny, mad & clever. It's HAL with a sense of humour.

In the process of the story Mike Yates goes undercover, gets hypnotised & tries to kill the Doctor but is deprogrammed by the Metabelis Three crystal. This is the start of what can only be described as the Mike Yates story arc. Never let it be said story arcs in Doctor Who started with RTD. Mike's about to start his. UNIT will never be the same.

Jo also falls in love with Cliff Jones who she describes as a 'younger version' of the Doctor & the story ends with her staying with Cliff & the Doctor driving off into the sunset. It's quite a sad little departure played in nice style by Bevan, Manning & Pertwee. The Doctor is clearly a little in love with Jo Grant & she with him.

So Season 10 ends on a high note & it is nice to see Jo Grant - who can be a bit irritating at times but is ultimately one of the more likeable companions - get a really good farewell seen & Katy Manning is slightly less 'enthusiastic' in this story than in some of the previous stories.

It's the last we see of Jo Grant until The Sarah Jane Adventures.