CLASSIC DOCTOR WHO ON BRITBOX – Planet of the Daleks 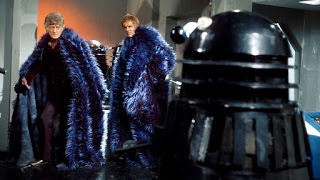 On 26th December 2019, 627 pieces of Classic Doctor Who content were made available to Britbox subscribers. Every Sunday in 2020, our Doctor Who expert, Tony Cross, looks back at some of the classic stories. Here is the Third Doctor adventure Planet of the Daleks...

I'm afraid this isn't just bad it's the worst Dalek story since The Chase.

It picks up where Frontier in Space picks off, dumps us on Spiridon with its invisible natives, dangerous plant life & Daleks. Yes, it's Terry Nation doing his greatest hits. He even wheels out the Thals again to assist the Doctor & Jo. Jo even gets what passed for love interest in Classic Who: an inexplicably instantaneous love that overcomes a man - it is always a man - for the Doctor's female assistant. It's unrealistic, undramatic & underwhelming.

David Malony, who usually does a fine directorial job, doesn't with this. In one scene Jo - hiding in pretty much plain site in Dalek HQ - wonders past a Dalek which is looking straight at her. STRAIGHT AT HER. I know hiding in plain site is a Doctor Who staple but normally those people hiding are standing still. This time Jo is moving.

Then there's the moment in Episode Four when Jo - or should I say when Katy Manning - reacts slightly ahead of the polystyrene rock that's about to drop on her head.

It's slow. It's padded. It's half-arsed. I'm sure the production team weren't deliberately making a bad story but it really looks like it has been put together by people that don't care.

In episode 5 some of the cast can clearly be seen standing off camera waiting whilst the action goes on in front of them.

When I watch Doctor Who I do so in two different ways. One part of me knows that the budgets are small; that it's obviously a studio; that rock is polystyrene; the monster is a block blatantly dressed in a rubber costume. That part of me is aware of how ridiculous some - if not all - Classic Doctor Who might look to people that only take a casual interest or no interest at all. I'm as capable of taking the piss out of the Skarasan, the Myrka, the Magma Beast or that stupid inflatable snake at the end of Kinda etc as the next Doctor Who fan. But...

There's another part of my brain where disbelief is suspended. Where I can ignore all the things listed if the story & the acting is good enough. I can look at something that is a risible now as The Web Planet and still enjoy it - even moved by it. Yes, it's a bunch of actors dressed as ants and moths but somehow it works for me. Because that Doctor Who bit of my brain says: right for the next twenty-five minutes I'm on an alien world or in a Nuclear Power station menaced by Cybermen or whatever. It's a gift.

However occasionally Classic Who produces a story that is so irritating that I can't suspend my belief enough to care. So, I find myself watching with a cynical eye and hoping that what appears to be happening isn't as stupid as I think it is. Planet of the Daleks is one of those stories.

I blame Terry Nation more than the rest of the team. Sooner or later the Doctor Who production team is going to cotton on to the fact that he just writes virtually the same bloody story every time he writes for the Daleks. Only the names change. It's doubly annoying because Terry Nation isn't a bad writer. He just seems not to want to try and do anything new or interesting with the Daleks. He writes for Pertwee as if he's Hartnell. It's like he's afraid that he might break the magic spell if he does anything too new with them. I shouldn't complain too much I know after all they are Nation's invention - even if the design isn't.

The actors - well, most of them - do their best. Bernard Horsfall is his reliable self. Tim Preece puts in a nice performance as Codal, who at the end appears to have fallen a little in love with the Doctor. Jane How's Rebec is fine to. Prentis Hancock as Vaber does what Prentis Hancock does best: a lot of shouty angry bad acting & we do at least get to see Roy Skelton on screen as the Spiridon Wester - even if it is at the moment of his death.

But in the end this is just tiresome.