CLASSIC DOCTOR WHO ON BRITBOX – The Time Warrior 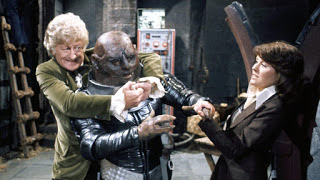 On 26th December 2019, 627 pieces of Classic Doctor Who content were made available to Britbox subscribers. Every Sunday in 2020, our Doctor Who expert, Tony Cross, looks back at some of the classic stories. Here is the Third Doctor adventure The Time Warrior...

So, we kick off Season 11. Jon Pertwee's fifth and final season.

The Time Warrior features two newbies: Sarah Jane Smith (Liz Sladen) and the Sontarans, although in this case it is a single Sontaran, Linx (Kevin Lindsay). It must be said that both have an instant impact.

I don't think Liz Sladen could have imagined that she'd still be playing Sarah Jane Smith nearly 40 years after her debut story but there's something immediately wonderful about Sarah Jane. She's got oomph, she's got style and she's proactive. One of the reasons for the character's longevity is down to how strong she is in this story. She doesn't immediately trust the Doctor or even like him. Indeed, the Third Doctor seems to go out of his way to aggravate her on a couple of occasions by making sexist remarks. She doesn't take any crap from anyone, even when she's clearly scared. This is a fantastic start for a companion and Liz Sladen puts in a star performance outshining virtually everyone, including Pertwee himself. I don't think it is any coincidence that Sarah Jane is the one companion to have achieved the singular honour of not just one but two spin-off series, although K9 & Company is rank.

The Sontaran(s) do make a significant impact. There's something in the simplicity of their design that helps but also Kevin Lindsay makes Linx a combination of arrogance and viciousness, which works well. It's also one of the great Doctor Who moments when, having kept the Sontarans head hidden we get to see what he really looks like as Linx turns to face the camera at the end of episode one. Conveniently Robert Holmes also gives him a nice little weakness: the probic vent. It makes them beatable.

This story has two strengths. A great script by Robert Holmes and a set of fantastic performances from pretty much every guest star. It's a real culture shock to see June Brown, playing Lady Eleanor because June Brown is Dot Cotton. It's one of those moments when you realise how little you know about an actor even when they have burned themselves into a nation's psyche. David Daker as Irongron - the human villain of the story - does a great job of balancing being larger than life but believable. Irongron is a bully, a braggart but not without his moments of humour.

His relationship with his sidekick Bloodaxe is sharply written by Robert Holmes and well-acted by John J Carney. There's a little scene where Irongron is outlining his plans to Bloodaxe - to which Bloodaxe gets in a pre-Baldrick 'cunning plan' - which I could watch over and over again (particularly the moment when Bloodaxe says that Irongron has a truly 'towering intellect')

The other nice part is Professor Rubeish (Donald Palmear). Rubeish is a scientist. He's blind as a bat without his glasses, which protects him from hypnotism. Again, the script helps by giving Palmear plenty to play with but it’s another good performance from a guest star.

So this is a good 'un. Well written, well-acted and with a couple of stonkingly new characters.