CLASSIC DOCTOR WHO ON BRITBOX – Invasion of the Dinosaurs 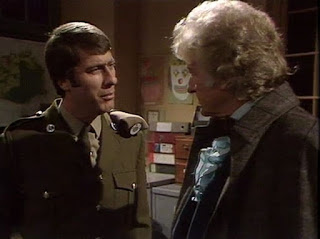 On 26th December 2019, 627 pieces of Classic Doctor Who content were made available to Britbox subscribers. Every Sunday in 2020, our Doctor Who expert, Tony Cross, looks back at some of the classic stories. Here is the Third Doctor adventure Invasion of the Dinosaurs...

"There never really was a Golden Age you know Mike"

Well this was a pleasant surprise.

An enjoyable old school Pertwee-UNIT story with dinosaurs, double-crosses, villains who are more blindly idealistic than evil, the Brigadier and Benton on excellent form and Sarah Jane Smith being brilliant. They should give that woman a series of her own you know.

Let me talk briefly of the dinosaurs. In my dusty memory I remember them being embarrassingly awful. However now I'd say that whilst the movement is a little dodgy the only one of the dinosaurs that is genuinely poor is the T-Rex. The rest looks OK. It was therefore unfortunate that the production team went for a T-Rex v Brontosaurus fight in Episode 5. It just looks a bit naff. I think it probably did in 1974 although I prepare to be corrected.

Basically a bunch of extreme environmentalists - for want of a better term - have cooked up a plan to push the Earth back in time to a 'Golden Age' before pollution and war. [*]

To help build a new world they have convinced several hundred incredibly gullible people that they are setting off in a fleet of spaceships to a new world where they can live a lovely, fluffy life. How well this will work based on Ruth's desire to bump of Sarah Jane after five minutes because she might be a disruptive influence is a moot point.

The Doctor and Sarah arrive late into the action. The first part of 'Operation Golden Age' has already begun. Central London - with 8m people - has been evacuated. The government has hot footed it to Harrogate leaving Sir Charles Grover (Noel Johnson) as Minister in charge. General Finch (John Bennett) is in charge of military matters, although the Brig and UNIT are doing a lot of the grunt work by the look of it. However, they aren't getting anywhere, and the Brig needs the Doctor.

There are some effective scenes of a deserted London in the first episode and director Paddy Russell does a fine job of ratcheting up the tension. The Doctor and Sarah are arrested for being looters, escape and start work with the Brig. The Doctor has some cunning plans but mysteriously they are all being sabotaged. There is an agent at work in UNIT...and it turns out to be poor old Mike Yates.

The Doctor and Sarah get involved in separate stories. The Doctor gets set up by General Finch and Sarah gets captured by Sir Charles and placed on one of the spaceships. Gradually the noose tightens on our villains. Captain Yates is exposed, the enemy base is discovered, General Finch gets punched on the nose by Benton, Sarah exposes the space people to the truth and in the final episode Sir Charles Grover and chief dodgy scientist Whittaker (Peter Miles) are sent back in time after the Doctor reverses the polarity - as the Third Doctor often does. Victory for the good guys and a fine comeuppance for the bad guys.

It zips by at a fair old lick for a six parter (although there is some chase type padding to fill in some time). The performances from everyone are strong and there are, in amongst the adventure, several strong ideas: about environmentalism, about the myth of a pre-industrial Golden Age, about facing up to the now and to paraphrase Gandhi changing the world by changing yourself and finally on whether the end justifies the means. Phew.

Big cuddly dinosaurs and big ideas in a six-part Doctor Who story.

It's worth watching. Don't let the dinosaurs put you off.


[*] My main quibble with the Operation Golden Age plan is surely by pushing themselves back in time and destroying all previous generations they will have un-existed their own ancestors and probably the technological advantages that previous generations had created thus making it impossible for them to have carried out their plan...it's a grandfather paradox writ very, very large. I mean you’re not just killing your grandad in this one you're killing all your ancestors.

Perhaps I shouldn't think about it so much.