CLASSIC DOCTOR WHO ON BRITBOX – Death to the Daleks 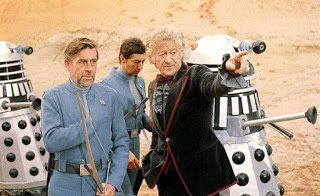 On 26th December 2019, 627 pieces of Classic Doctor Who content were made available to Britbox subscribers. Every Sunday in 2020, our Doctor Who expert, Tony Cross, looks back at some of the classic stories. Here is the Third Doctor adventure Death to the Daleks...

It's another Terry Nation Dalek story... forgive me if I don't look too excited. Like Planet of the Daleks this is not the most exciting of stories whilst throwing in a few Nation clichés.

The most annoying of which is saving the Daleks until the end of the first episode so that they can play their cliff-hanger role. This would be fine if the story did not give the game away IN ITS TITLE. Sorry. I'm not sure what came over me there, Nation fatigue?

Anyway as Doctor Who stories go it is distinctly average. The TARDIS lands and is mysteriously drained of all its power whilst the Doctor and Sarah Jane are on their way to the lovely Florana. (This 'let's go somewhere nice...oops didn't make it' is one of the series recurring tropes. It'll keep writers happy forever).

Setting out to investigate the Doctor is grabbed by a bunch of grunting primitives - later revealed to be called Exxilons - from whom he escapes then to stumble across a party of Marine Space Corps who have landed on Exxilon in search of Parrinium (McGuffin of the Week), which is needed to save the Outer Worlds from a mysterious space plague. They've been stuck here since their ship was forced to land after a similar power drain. They are made the wounded and soon to die Commander Stuart, Railton (a totally wasted John Abineri), the plucky Jill Tarrant (Joy Harrison), the wet Hamilton (Peter Fox) and the grumpy Scotsman Galloway (Duncan Lamont).

Meanwhile Sarah has gone off exploring and stumbled across a rather impressive City. The Daleks arrive, threaten to exterminate everyone but find their weapons do not work because of the energy drain. They must work with the humans but everyone is captured and Railton dies (thus wasting Abineri totally, which should be an executable offence really).

Sarah is to be sacrificed by the grunting Exxilons for trespassing in their City, which is sacred to them. The Doctor tries to rescue Sarah but succeeds only in adding himself to the sacrificial party.

The Daleks, having fitted themselves with old school machine guns, set about massacring Exxilons, bullying humans and mining the Parrinium. Commander Stuart snuffs it, after telling Galloway that he is totally unfit for command. (For some reason I kept thinking about George Galloway at this point...not sure why)

The Doctor and Sarah escape and start exploring the roots of the city when they bump into Belal (Arnold Yarrow) who a non-grunting Exxilon. The Daleks start Parrinium mining, chase the Doctor and decided to blow up the City's beacon, after they've had a look round.

The Doctor and Belal enter the City just ahead of the Daleks, whilst Sarah and Jill set about getting the Parrinium on board the Earth ship ready for when the energy drain ends. The City, which is sentient and a bit up itself, had been responsible for primitivizing (a word I happily make up, you may take it with you and use it to your heart's content) the Exxilons who were previously an advanced, space travelling type civilisation. It's also a complicated series of traps and tricks: secret entrances, mazes, electrical floors etc.

The Doctor gives the City a nervous breakdown, a couple of panicked Daleks are chased out of the City by the antibodies it created...then the Daleks ignore a perfectly good opportunity to eliminate the Doctor - again - and flee the planet with what they think is the Parrinium but isn't and much to their surprise Galloway and a bomb. Boom! Galloway redeems his grumpy, real politick Scottishness. Jill and Hamilton get to take the Parrinuium away. Hurrah!

Which makes it all sound quite exciting but in fact it is all a little dull. Quarries, grunting primitives and a slow trip through a city do not fun and frolics make.

Galloway seems to be a character from another much bleaker Terry Nation story whose stumbled into Death to the Daleks. He's surely a Blake's Seven man or a Survivor. Lamont actually plays him quite well. He at least seems three dimensional unlike the rest of the Space Marine lot who are either bumped off at speed or wet but plucky.

Pertwee's a bit flat in this I think, as if he's not really that impressed but Liz Sladen's doing a great job as Sarah Jane. She does a great job of conveying quite a lot in a brief glance or lip purse.

Also Arnold Yarrow's Belal is a lovely little performance for a man stuck inside glowing plastic. He's quite sweetly brave when he joins the Doctor on exploring the City.

It’s better than Planet of the Daleks but that's damning with very faint praise indeed and is only four parts long so doesn't drag as much.

I'm a bit surprised actually. This is one of the stories that I'd watched (and liked) before but on revisiting is a disappointment, like Tomb of the Cybermen was.