CLASSIC DOCTOR WHO ON BRITBOX – The Android Invasion 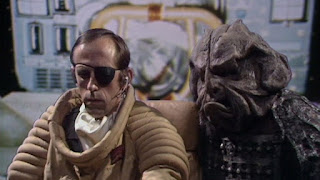 On 26th December 2019, 627 pieces of Classic Doctor Who content were made available to Britbox subscribers. Every Sunday in 2020, our Doctor Who expert, Tony Cross, looks back at some of the classic stories. Here is the Fourth Doctor adventure The Android Invasion...

This is an oddity. It's a story which for two episodes is quite brilliantly atmospheric, creepy and bizarre and then for the last two episodes becomes something of a bog standard Doctor Who runaround. Fundamentally though it is let down by an eye patch.

Yes, you heard me an eye patch. Specifically the eye patch worn by Guy Crayford (Milton John). Crayford is the British deep space astronaut who out of gratitude at being rescued by the Kraals is working with them to help invade Earth. So convinced of their beneficence is he that he believes everything he is told. This extends to believing chief Kraal baddie Styggron's explanation for his rescue. Styggron rebuilt Crayford, apart from one eye which mysteriously they could not find. Accordingly he wears an eye patch. You with me so far? Good.

Except it is a trick. Crayford was hijacked. There is no damaged eye. Underneath the eye patch the eye is fine. Let me repeat that UNDERNEATH THE EYE PATCH THE EYE IS FINE. Crayford is such a Muppet that throughout his stay with Styggron he's never once looked under the eye patch. Would you not, out of morbid curiosity, want to look? Does he sleep with the eye patch on? WHY IN THE NAME OF ALL THINGS CREATIVE DOES STYGGRON EVEN DO THIS. IT MAKES NO SENSE.

On discovering his eye is fine Crayford realise he's been betrayed by Styggron. His reaction, possibly driven by the realisation of his own total and utter stupidity, is to go Mano a Mano against Styggron and die.

This isn't the only stupid thing about the eye patch. Oh no.

When he's returning to Earth Crayford's eye patch is on video screen in the control centre for all to see and at no point does anyone go..."Hang on, is that an EYE PATCH?" No, it passes totally unremarked, which is also BLOODY STUPID.

I'm sorry to dwell on the eye patch so much but it is the sort of idiotic thinking that makes me want to smack people around the head with spoons.

The Kraals, a sort of grumpy rhinoceros type creature, look good too, although Roy Skelton's Chedaki is slightly distracting as Skelton seems to be doing a prototype Zippy from Rainbow voice.

But it's all undermined by that BLOODY EYEPATCH...actually not just the eye patch.

There's one other gaping piece of idiocy. Styggron has been preparing a virus to wipe out mankind, it's virulent and affects Kraals too apparently. It's supposed to last three weeks then disappear. Yet when Styggron lands on a bottle of the stuff in a smallish room containing the Doctor, Sarah, Harry and Colonel Faraday (Patrick Newell) it kills Styggron (mainly because he rolls his face around in it) but does no harm to anyone else. At all, which seems a bit flipping odd.

The dumbest thing of the lot is this is still quite fun if you don't stop to think about it too much...especially not that BLESSED EYE PATCH.