CLASSIC DOCTOR WHO ON BRITBOX – Pyramids of Mars 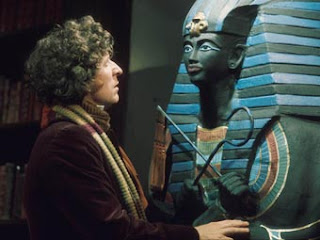 On 26th December 2019, 627 pieces of Classic Doctor Who content were made available to Britbox subscribers. Every Sunday in 2020, our Doctor Who expert, Tony Cross, looks back at some of the classic stories. Here is the Fourth Doctor adventure Pyramids of Mars...

I suppose there's no such thing as a 'perfect' ten out of ten Doctor Who story. No story that is without some quibbles but 'Pyramids of Mars' is pretty near to perfection.

The quibbles are mainly centred on the final episode, which is padded out with some Exillon City style games inside the Pyramid of Horus but this doesn't make the story less entertaining.

It might be described as one of the most horrific Doctor Who story yet whilst the number of actual deaths are small - and only one is actually entirely on screen - they are all painful. Two of them, those of Dr Warlock (Peter Copely) and Lawrence Scarman (Michael Sheard), feel horrible, even if we don't see them. Peter Copely's fear is nastily real and Michael Sheard's plaintive: "Marcus, you're hurting me" just before we cut away is quite heartbreaking.

Lawrence Scarman's death might be the most affecting death seen in any Doctor Who story and the Doctor and Sarah's contradictory reactions too it are superb. The Doctor, his mind on the bigger picture, casually rolls Lawrence's corpse over whilst Sarah is upset and angry at the Doctor for not being 'human', something that the Doctor points out he isn't, obviously.

In fact I don't think there's a dud performance from any of the cast, even poor old George Tovey as Clements, the poacher who gets the on-screen death, is real enough.

Peter Copely's Dr Warlock is magnificently posh and argumentative in his scenes with Namin. He's also one of the few actors to play wounded as if it really hurts and he plays his pre-death scene with enough conviction to make it as genuinely horrific as it would have been with blood and gore, if not more so.

Bernard Archard's Marcus Scareman is actually quite terrifying. The short scene where he struggles to shake off Sutekh's control just before he kills Lawrence is a brilliant two hander between him and Michael Sheard.

Sheard himself is wonderful. Lawrence is a fussy, frightened little man but loves his brother to a suicidal degree. You get the impression from his performance that he was a put upon chap, perhaps standing in his brother's shadow. It's lovely work, probably Sheard's best performance in Doctor Who.

Kudos should also go to Gabriel Woolf as Sutekh. He's never seen. It's just his voice but the malevolence he conveys makes Sutekh possibly the series most genuinely scary villain up until now. He's given some great lines to by the writers. (It's credited to Stephen Harris but was the combined work of Lewis Griefer and Robert Holmes apparently).

The dialogue at the end of episode three and beginning of episode four where a clearly frightened Doctor is made to abase himself and Sutekh threatens him is magnificent and played with conviction.

Tom Baker and Liz Sladen also seem to rise to the occassion bantering off each other in amusing style at one point but the aforementioned scene around Lawrence Scarman's body is probably the highlight. That and the nice little scene in the TARDIS early on. It also must - well, not must but can - be said that Liz Sladen looks particularly lovely in this story.

I've not said much about design or direction but to me this is a Doctor Who story that thrives on a great script being delivered by good actors. Yes, it looks nice. I like the idea of the Mummy's not be the embalmed corpses of horror films but instead they're the robot servants of an advanced civilisation.

So quibbles: Sutekh looks more convincing in his mask than with it off, there's some gratuitous use of the insides of a thermos flask and the final episode is a bit padded out. That's it. Oh and where did Sarah learn to be a crack shot? But that's definitely it.

This is, in my view, one of the almost perfect Doctor Who stories. It is also really quite horrific for something shown at a tea-time on a Saturday with its mixture of Egyptian mythology and science-fiction.