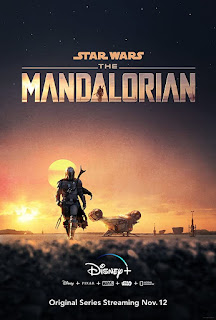 With Extraction director Sam Hargreave signed up for season 2 of The Mandalorian, our own baby Yoda, Kraig Taylor-Bryant, takes a look back at season 1...

There are a great many things about I can say about the first live action Star Wars TV show, but many more about the first episode titled (ironically) “The Mandalorian”. From beginning to end of this episode we get the Western vibe of either a sandy/grungy setting or a bar of sorts, seeming to more gradually branch out into a more sci-fi Star Wars feeling as the show starts to reveal more ships/planets we are familiar with. It’s obvious through the colours that are chosen, the music, the tone and the actions of the protagonist that the show is trying to stick to the space western routes of the original three Star Wars movies, whilst offering us something new, but also familiar.

The Lone Ranger vibe is something we got a small dose of with the character of Boba Fett in the original three films, a character hunting bounties, certainly gives off a western feeling, however for a bounty hunter we didn’t see much bounty hunting, with the exception of capturing Han in Empire Strikes Back. After Boba Fett captured the hearts of many children that saw him as the cool character with a jetpack who wouldn’t want a character of a similar calibre?

It appears that everything in the Mandalorian’s universe seems new because of the change in overall tone, music score, species and even technology, most of this seems new to us, but still maintains the “lived in” style that the original Star Wars trilogy thrived in. Did you ever wonder what Vader meant in Empire strikes back by “no disintegrations”, well this show gives you the answer to that question, in the sense that the show also expands the universe with it’s subtle nods to quotes like that, which to me is one of the major hints that the creators themselves are big fans of the franchise.

The fact that the show embraces and expands the western feeling that Star Wars had in its first trilogy, along with the constant sci fi element also helps to make the show appeal to a wide range of audiences, the sci fi element intriguing a younger audience, alongside the western atmosphere, which helps by reminding older audiences of those 70s or 80s westerns that they grew up loving (including Star Wars), it’s that feeling of nostalgia for a familiar Star Wars setting/character, or a mysterious lone ranger type character that I think encourages and intrigues audiences, that makes it perfect for the family friendly Disney+ service.

Someone might wonder how it’s possible to feel sympathy or even any connection to this “lone ranger” character that never takes off his mask (as this is mentioned to be a tradition of the Mandalorian creed), well it’s not the characters visible emotions that help us understand him, but the people he interacts with, and how they have an effect on him. The obvious one of course being “Baby Yoda” (the one who seems to have taken the internet by storm), which I think helps to bring The Mandalorian back to the most central Star Wars theme, family. The one consistency in every film (with perhaps the exception of Solo) is family in the Star Wars franchise whether it be the characters mother, wife, child, father or even a family made from unlikely friends, the thing that makes Star Wars a family franchise is the families within it, and Baby Yoda and his relationship with the Mandalorian gives a very father-son feeling, helping to capture the Star Wars essence.

Somehow, the music in this show, seems to capture all of it, the innocence of the baby seems to be intertwined into the main theme (played at the end of each episode), with the western type music being played during the scenes where necessary, whether it be the Mandalorian walking into a bar to confront his bounty, or the Mandalorian travelling across the desert. The very fact that these are played alongside each other in the main theme, signifies his conflicting personality, the Mandalorian wants to be a loner but he can’t help but feel attached to the little “womp rat” (baby Yoda/the child) and who can blame him?

I think it’s clear that Favreau knows what to do when it comes to creating Star Wars a show that fits the western vibe in a much deeper, more literal way. Favreau and the shows other creator Dave Filoni choose to give the main character his own code of justice, and include the idea of tribes in the show, which feels familiar to us as an audience but also space age when it’s implemented when he’s referring to his own people, the Mandalorians, again building on that idea of the importance of family.

The show in general also speaks as a clear example of a project that has clearly allowed the directors of each episode their own freedom, but within certain parameters. This allowing them to give their own charm to the show, but also maintain what the show is. At least to me, the show is a space western that can have its rare funny moments, but also clearly takes inspiration from older films to emphasise what Star Wars is, an inspiration of familiar things that came before, whether that be Flash Gordon, western movies, or fantasy films involving saving a princess.

Maybe it’s also down to the fact that there are many directors involved in this project that give it various flavours, similar to how the original trilogy manages to be cheesy and comedic in the first act, mostly serious in the second act, with a few moments of ridiculous humour (such as Threepio moaning whilst stuck to Chewbacca's back) and the third being an interesting mixture of the unusual and the serious. Of course, the new trilogy did something like this, however they didn’t use the same writer, and perhaps that’s one of the things I can agree with others, as being a problem with the newer films, and something that this show seems to get right.

This show also seems to have an effective use of the technology that the prequel trilogy of the early 2000s gave us, whilst also creating something for the actors to react to, like in the old trilogy, this much is made obvious in the recently released Star Wars Gallery in which they explore their projection technology that allows the actors to feel as if they are in the Star Wars universe when they’re on set. They mention this as allowing them the ability reshoot quickly and easily if need be, which is likely the reason why we are already getting the second season of the show as soon as October, which I’m sure won’t disappoint.

I think the best way to sum up this show is that it sets a perfect example on how to tell one story with numerous twists and turns that don’t send the overall tone too out of control, and I think that’s what again, helps take viewers back to a time when this was how the original Star Wars films were told, helping to give audiences varying opinions on their favourite films. Ultimately that’s what this show feels like, its own eight film saga. And I, for one, cannot wait for the next chapter.

Watch The Mandalorian on Disney+