CLASSIC DOCTOR WHO ON BRITBOX – The Robots of Death 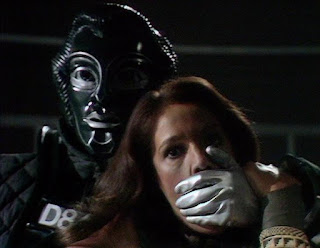 On 26th December 2019, 627 pieces of Classic Doctor Who content were made available to Britbox subscribers. Every Sunday in 2020, our Doctor Who expert, Tony Cross, looks back at some of the classic stories. Here is the Fourth Doctor adventure The Robots of Death ...

I have said before that there is no such thing as the perfect Doctor Who story but 'Robots of Death' is as near you can get. A thing of beauty: in performance, scripting, design and direction. I have to admit that this has always been one of my favourite and most watched Doctor Who stories, although it has been a while since the last time I watched it. It was possible, like with 'The Deadly Assassin' that I might find it disappointing this time, but I didn't. This is Doctor Who at its finest.

Whilst the basic plot is a Doctor Whoed version of an Agatha Christie murder mystery the script itself is filled with little moments of wit and cleverness. There are also hints of a world beyond the Sandminer, with talk of Kaldor City (later developed by Big Finish), 'the founding families' etc. The characters to appear to have had lives before the Doctor appears and the survivors may have lives afterwards to. All of which adds layers to the story.

It is also well acted. Tom Baker is excellent in this, dealing with an interrogation by Commander Uvanov (Russell Hunter) with aplomb and dismissing Borg's (Brian Croucher) bluster with one of the series great put downs. Louise Jameson to does sterling work as Leela, dispensing the wisdom of her tribe whilst helping Toos (Pamela Salem) with her injury. Also worthy of mention is the scene between Leela and Poul (David Collings) after Poul has lost his mind.

Credit should go to Collings for his portrayal of Poul, especially after his breakdown. But Russell Hunter's Uvanov is also excellent. He gets a broader pallet of emotions to play with than is often the case with the non-leading roles in Doctor Who. He also manages to carry off a ridiculous piece of headgear without looking the remotest bit uncomfortable. Uvanov is a man who has made it the hard way. He's not a member of the Founding Families like Zilda (Tania Rogers) and occasionally his feelings about this (and his dreams) come to the fore.

David Bailie as villain of the piece Taren Capel is a nice change from the shouty over-emotional villains of some stories. Determined to free his brother Robots from slavery to humans his 'physical and verbal precision' (as the Doctor points out) shows his roots: raised by robots as a child he thinks of himself as one of them. It's Stockholm syndrome writ large.

The robots themselves are beautiful designed, almost art deco in look and are voiced with marvellous cold precision by Miles Fothergill, as SV7 and Gregory de Polney, D84.

Actually the robot 'class system' is a nice touch to. There's D-for Dumbs, V-for Vocs and SV-for SuperVocs. Dumbs don't speak and do most of the chores. D84 is an investigator in disguise, alongside Poul.

Their emotionless but lyrical voices and lack of body language do make them genuinely disturbing when they turn against their human crew. Poul, after his breakdown describes them as 'walking dead', which seems a good description to me. However that doesn't stop D84 having a personality of sorts and his 'death' is actually surprisingly affecting.

By the way "Please do not throw hands at me" is one of my favourite lines of dialogue in Doctor Who ever.

I have found when writing these articles that it is harder to write adequately about the stories you love than the stories you don't like. It's easier to me negative than positive; to criticise than to praise. So you'll forgive me if I'm struggling to explain precisely why this story is so brilliant. It is almost the first story I'd reach for to show newbies how great Classic Doctor Who was and is.

There are quibbles but they are so minor as to be irrelevant. If you haven't seen this story then you should.