CLASSIC DOCTOR WHO ON BRITBOX – The Face of Evil 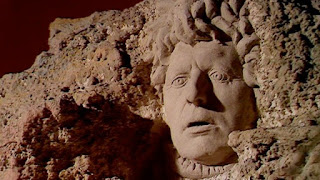 On 26th December 2019, 627 pieces of Classic Doctor Who content were made available to Britbox subscribers. Every Sunday in 2020, our Doctor Who expert, Tony Cross, looks back at some of the classic stories. Here is the Fourth Doctor adventure The Face of Evil  ...

So having left Sarah Jane for a solo adventure on Gallifrey we are introduced to Leela (Louise Jameson), a child of the Sevateem. A savage and a hunter. Although we shouldn't assume she's stupid. She's got three excellent qualities: a taste for sarcasm, courage and an open mind. The pre-Doctor arrival sequences emphasise that however backward her upbringing Leela isn't stupid.

Also the relationship between Leela and the Doctor seems to click from the start. It certainly helps the story that the Doctor isn't on his own.

This feels not too different to 'The Planet of Evil'. It's a jungle, a base under siege (or in this case a village under siege both physically and mentally) and some invisible enemies. The difference is that there's been a real attempt to sketch out a society here. One that has an existence when the Doctor isn't there.

It might not be civilisation as we know it but the myths and religion make it feel alive. As a result the site of a handful of British actors clad in loincloths isn't as awkward as it sometimes feels - I'll talk about this a little when we get to the Power of Kroll.

The link between the Sevateem's religious rituals and the technology of their spacefaring ancestors is also nicely done, which becomes even more fun when as the story moves along we meet the Tesh and understand more about what has happened here after the Doctor's previous (unseen) adventure.

The fact that the Sevateem (Neeva, the High Priest included) mistake the Doctor for the 'Evil One' is one of those initially a pretty traditional moment of dropping the Doctor into a situation where he gets the blame, gets peoples trust and then wins. But this theory gets neatly turned upside down at the end of episode one when we see the Doctor's face carved onto a large cliff. It's a nice little twist and an unusual cliff-hanger.

Although my favourite cliff-hanger is the one that finishes episode three when Xoanon, who isn't a God as the Sevateem think but a poor, mad computer suffering from the Doctor's previous attempts to help, reacts to the Doctor's life shattering appearance by screaming 'Who Am I?'. It's creepy and mildly upsetting.

This is one of those Doctor Who stories where the villain isn't really villainous at all, just a child driven insane. A new life-form going through an extended birth trauma. Its experiments on both the Tesh and the Savateem aren't nice but the truth is that Xoanon is genuinely insane, something to which the Doctor has contributed. Unusually and indirectly the Doctor really is 'The Evil One' in this story.

There's some nice performances but I'll flag up David Garfield's Neeva - after Louise Jameson - as the pick of the bunch. There's some nice work from other actors to but they have less to do, although a little praise for Mike Elles as 'little' Gentek, the Tesh whose moment of mild panic at the prospect of losing to the Sevateem gets a rebuke from Jabel (Leon Eagles) the Captain of the Tesh.

Earlier I said that 'The Deadly Assassin' was a mild disappointment. Well now 'The Face of Evil' proved to be a pleasant surprise. Much better than I remember, some lovely performances and, whilst insane computers aren't the most original idea, it is translated to the screen in an interesting and creepy fashion.