CLASSIC DOCTOR WHO ON BRITBOX – The Deadly Assassin 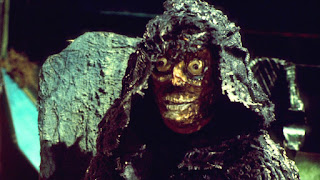 On 26th December 2019, 627 pieces of Classic Doctor Who content were made available to Britbox subscribers. Every Sunday in 2020, our Doctor Who expert, Tony Cross, looks back at some of the classic stories. Here is the Fourth Doctor adventure The Deadly Assassin...

Well, well, well here's a turn up for the books. This is something of a surprise. It isn't quite as good as I remember it. In fact I'd say this is the first disappointment since Tomb of the Cybermen in my journey through broadcast Doctor Who.

I should say that it isn't terrible. It's just a meh story. All mouth & no trousers.

I've been trying to put my finger on why. Perhaps it is that Tom on his own doesn't quite work. In fact the problem with this story is that Tom doesn't really interact with anyone to any great degree. The main villain & he are kept separate until virtually the end of the story, instead he gets to fence with Chancellor Goth for most of it. It's an oddly 'cold' story.

This is only the second time we've seen Gallifrey. In 'The War Games' it seems a sterile, clean sort of place. They'd be no dust here. But this Gallifrey is less impressive, more a culture in decline than the pinnacle of galactic civilisation.

I think it is fine to reflect its staid dullness by casting older actors in the majority of the roles & the Doctor's comments about their technology not being quite as sophisticated as they think it is reflects that. This is a planet in stagnation & you can understand why the Doctor (& others) wanted to flee the place & do something more fun instead.

It takes this & 'Invasion of Time' before the Time Lord's change their interior design to something more akin to an office in an industrial estate somewhere in the Home Counties. Now though the design is good. It's ill-lite, sea green & tacky. However the Time Lord's costumes, with the skullcaps & collars, look fantastic. When they get dressed up it is a reminder of past glories.

What I do take exception to is the claim that they'd have lost their knowledge of a Black Hole underneath the Panopticon. To lose understanding of some things is one of the sadness’s of history but to lose a Black Hole smacks of deliberate stupidity. It is as if Holmes wanted to take the Time Lord’s down several pegs. After all it is this story that gives us the arbitrary twelve regenerations issue, as well as Rassillon & his various knick-knacks.

Then there's also Runcible (Hugh Walters). I don't mind the performance it is just the character seems a tad unnecessary. Who is he broadcasting to & why? I also think Robert Holmes could have stretched himself a bit beyond C.I.A as the initials of the Time Lord’s Celestial Intervention Agency. It's a tad unsubtle. Why not just the Intervention Agency.*

The scenes in the Matrix are tense enough & notably odd, although quite why Goth needs to be so theatrical about the process is beyond me. If I were the Master I'd be telling him to get on with it & stop faffing about with the clowns & biplanes.

Ah, Goth. I've no idea why the production team went to such lengths to disguise Goth. Much as I like Bernard Horsfall's performance it is pretty obviously him, despite the croaky whisper. A croaky whisper he takes on board when he's talking to the Master who ALREADY KNOWS WHO HE IS! Why is he bothering then? Why?! So the big reveal in Episode Three is a bit of a damp squib to be honest.

By that point you’re also starting to ask questions about why the Master drags the Doctor into this in the first place, except to make his own life difficult. Wouldn't revenge on the Doctor be easier once you've seized control of Gallifrey? As I've said before it’s no wonder the Master gets through his regenerations so quickly when he's this idiotic.

However the Master's appearance is brilliantly horrible & bordering on the genuinely horrific. I'm surprised they managed to sneak this past a tea time audience. It's no wonder Mary Whitehouse got her knickers in a twist. It's not just the look, it's the healing scab stickiness of the look. It's not nice. Peter Pratt does an excellent job, trapped behind a mask to use his voice to give life to the performance. This is definitely a Master on the edge of a nervous breakdown. There's certainly more connection between the skull faced Master of this story & John Simm's new series lunatic than between Simm & Delgardo or Ainley.

In the end though this story isn't quite up to the standards of my memory. Yes, it has some strengths but also lots of niggling weaknesses. In the end its fun but not the stone cold Classic I remember it to be - or that fan lore might lead us to believe.

It does however define the Time Lords & Gallifrey for the foreseeable future.


*I quite like the idea of the Intervention Agency. I may run off & play with it.