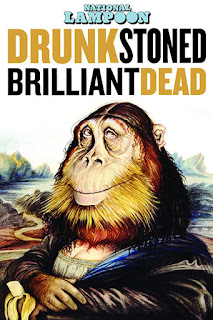 Steve Taylor-Bryant settles down to watch a documentary about his favourite kind of comedy, American satire, as he watches the 2015 film Drunk Stoned Brilliant Dead: The Story of the National Lampoon…

It is no secret that I prefer American comedy over British, a strange but not unique side to be on for a Brit, and as you will be aware from my various articles on American sketch comedy, and Saturday Night Live, and Garry Shandling etc [honestly there are loads! Like SNL Doc, Top 10 sketches, Sitcoms - Ed] I am more than aware that most, if not all, of these things have National Lampoon to thank for paving the way. In fact, former Lampoon contributor Rick Meyerwitz's book, also titled Drunk Stoned Brilliant Dead, is a fantastic insight into the origins of National Lampoon and contains archive material from the magazine that is just breath-taking to see, which is why I wondered what more filmmaker Douglas Tirola could add to the conversation with his documentary. Drunk Stoned Brilliant Dead is now available on Sky Documentaries in the U.K. so I thought I would delve in and see if it was worth your time.

To start with, if you haven’t read the book from Meyerwitz or really don’t know how /who /why /when /where National Lampoon is, then the documentary spends a bit of time explaining about its Harvard roots and the relationship between its founders Doug Kenney and Henry Beard. This, along with input from publishers, lawyers, contributors, future editors, artists and the like, for those who aren’t familiar with the story, is quite the essential watch and seeing Beard himself being interviewed is such a rare treat I deemed the film worthy on that fact alone. But what the film offers that you cannot from the book is archive film of the beginning of the future of American comedy. Starting with the National Lampoon Radio Hour, and ending up with the Lemmings theatre run, you see how such luminaries as John Belushi, Bill Murray, Christopher Guest, Chevy Chase, and Gilda Radner got started after their move from Second City Improv in Chicago to New York and the National Lampoon team. Seeing snippets of Belushi in Lemmings, of Radner and Murray recording the sketch radio comedy, and the likes of Judd Apatow, John Landis and Ivan Reitman commenting on the building of this comedic powerhouse is like the best history lesson available to a man. Of course, after turning down NBC’s offer of a Saturday night television show because they were too busy, National Lampoon lost all its stars and most of its writers to NBC who started a comedy show anyway with Lorne Michaels called Saturday Night Live, and it's around this time that things started to drift apart with Lampoon staff and Lampoon audience alike.

Whilst the difficult times are described in detail and not glossed over, and the sad demise into drug addiction of the genius that was Doug Kenney is dealt with in detail, it is the happier more creative times with National Lampoon that I preferred to concentrate on and the entire section on Animal House from its inception to the behind the scenes clips to its success on the big screen is a joy to watch. It's not often you get a front row ticket to a game changing event and Animal House launched the careers of many, started a genre all of its own, and moved the boundaries of what was acceptable from film comedy and to watch all of that happen within this documentary felt like an honour, like I was being invited in to a secret. The eventual demise of National Lampoon, the further films starring Chevy Chase, are all in the documentary and the film is well worth your time, but be prepared for nudity, highly original and most definitely offensive comedy, and a look at the most iconic yet terrifying magazine cover of all time. Drunk Stoned Brilliant Dead: The Story of the National Lampoon is a must watch for comedy connoisseurs, and an entertaining way to spend a couple of hours. 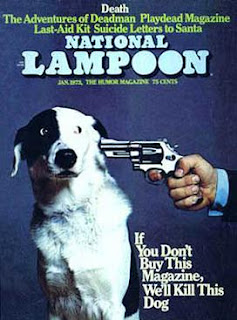