CLASSIC DOCTOR WHO ON BRITBOX – Revenge of the Cybermen 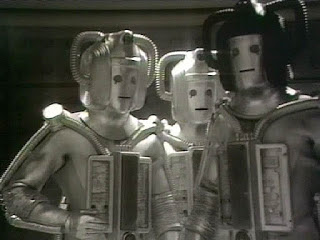 On 26th December 2019, 627 pieces of Classic Doctor Who content were made available to Britbox subscribers. Every Sunday in 2020, our Doctor Who expert, Tony Cross, looks back at some of the classic stories. Here is the Fourth Doctor adventure Revenge of the Cybermen...

I'm beginning not to like the Cybermen much. In my head and on their reputation they're one of the series great villains, second only to the Daleks but having been watching the series through since 'An Unearthly Child' I'm struggling to see why.

Of their stories so far only their debut 'The Tenth Planet' and 'The Invasion' are that great and in the latter the Cybermen are effectively just the muscle, it's Kevin Stoney's Tobias Vaughan who gets most of the action. 'Tomb' is OK but 'The Moonbase' and 'The Wheel in Space' are both not up to much. Jon Pertwee never had a story with them in so 'Revenge' is their first proper story since the Invasion in 1968. Seven years later we get 'Revenge' and then they won't appear again until 'Earthshock' in 1982.

On the basis of 'Revenge' it isn't hard to see why there's such a long gap before the appear again because it is pretty poor and in the Doctor's own words to the Cyberleader: "You're just a pathetic bunch of tin soldiers skulking about the galaxy in an ancient spaceship."

In fact they're a shoddy lot all around. The costumes have been redesigned. I'm not Ian Banks so I'm not going to dwell on that except to say that it was a dumb decision to stick their guns at the top of their heads. They wouldn't look so bad if they didn't spend huge amounts of time standing with their hands on their hips pontificating.

The production team's decision to let the Cyberactors play their lines without their previous vocal treatments also doesn't help as they end up sounding less like Cybermen and more like a Brian Blessed convention. Christopher Robbie's Cyberleader in particular is less cybernetic organism than mid-Atlantic voiced actor trying to be heard in the Circle.

Because the Cybermen are so pathetic it undermines the rest of the story, which isn't the most exciting of tales anyway. The Doctor, Harry and Sarah arrive on the Nerva Beacon - scene of the Ark in Space remember - having completed their mission on Skaro for the Timelords.

However they've arrived early so whilst waiting for the TARDIS to show up they decide to explore. It's pretty obvious pretty quickly that something is wrong. The corridors of the space station are filled with corpses. (Mostly dummies to be fair but it seems churlish to dwell on that) It turns out that they've beamed into the middle of what appears to be a plague. Only four - soon to be three - of the crew survive: Commander Stevenson (Ronald Leigh-Hunt), Lester (William Marlowe) and Kellman (Jeremy Wilkin), although strictly Kellman's a civilian xerographer.

Nerva is acting as a beacon around a mysterious 'moon' on the edge of Jupiter named 'Voga' by Kellman. Kellman's surveyed it and explained that there's no life there, except as because obvious that there is, the Vogans. It turns out that Voga is the remnants of the legendary planet of gold, which played a key role in helping humanity defeat the Cybermen during their war. It turns out that the Cybermen can be destroyed by gold.

This, it seems, the Vogans themselves haven't been told or don't know, which is the big bleeding bit of stupidity at the centre of the story.

The main Vogans are played by an excellent cast: Michael Wisher is the consumptive scientist Magrik, David Collings is the speechifying politician, Vorus and the aforementioned Kevin Stoney is the old councillor Tyrum but the masks they have to wear don't help them bring much life to the rather stilted dialogue.

Blah...you know I really can't be too bothered to explain this. It turns out that Vorus is working with Kellman to stitch up the last Cybermen so that the Vogan's can finally escape their subterranean hiding place. The Kellman-Vorus plan is to lure the Cybermen to Nerva then destroy them using their Skystriker rocket, built by Magrik. It's as cunning as one of Baldrick's plan and the Doctor's meddling almost puts a sonic screwdriver in the works.

The Cybermen have kept three of the crew alive to deliver three 'Cyberbombs' into the middle of Voga to blow it up thus GETTING THEIR REVENGE. (Sigh)

Vorus and Magrik get killed by Tyrum trying to launch their rocket, Kellman dies in a rock fall caused by Harry, who almost kills the Doctor to, Sarah trapped on Nerva gets rescued by the Doctor, then they're both recaptured as the Cybermen decide to crash Nerva into Voga...strutting off to their ship with a quip leaving the Doctor and Sarah to witness 'the biggest bang in history'. They escape, save Nerva from crashing & the Skystriker takes out the Cybership. THE END...thank heavens.

The cast deserves so much better.