CLASSIC DOCTOR WHO ON BRITBOX – Terror of the Zygons 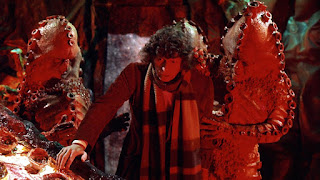 On 26th December 2019, 627 pieces of Classic Doctor Who content were made available to Britbox subscribers. Every Sunday in 2020, our Doctor Who expert, Tony Cross, looks back at some of the classic stories. Here is the Fourth Doctor adventure Terror of the Zygons ...

"Oil? An emergency? Ha! it's about time the people who run this planet of yours realised that to be dependent on a mineral slime just doesn't make sense."

So we've arrived at Season Thirteen. Tom's got his first season behind him. Hinchcliffe and Holmes, as Producer and Script Editor, are in total control. Season Twelve's scripts had been commissioned by Letts-Dicks and whilst Tom Baker's Fourth Doctor was obviously totally different to Jon Pertwee's the tone of Season Twelve was not hugely different to that of the Pertwee era. This was about to change.

'Terror of the Zygons' is magnificent. There's no other way to describe it. That makes it hard to write about. It's much easier to be scathing about bad stories than to do justice to good ones but 'Terror of the Zygons' is one of those Classic Doctor Who stories that burnishes bright more than 30 years after it was made. Yes, the Skarasen isn't the world's greatest special effect but it isn't the worst either and the Zygon's are an wondrous piece of design work from James Acheson: half-human embryo, half-octopus.

The Zygons whisper, rather than shout. They're not without a sense of humour and they can transform themselves into human beings. Why they've not been used more in the series I don't know.

The Doctor, Harry and Sarah Jane have returned to Earth in response to a summons from the Brigadier who has been called to Scotland to investigate the destruction of several North Sea oil rigs. He is HQ'd in a pub in a village called Tullock.

It turns out the attacks on the rigs are being carried out by the Skarasen, a cyborg water creature controlled by the Zygons. The Zygons have been lurking at the bottom of Loch Ness in a spaceship for several hundred years as the result of damage and the Skarasen is their food provider - its 'lactic fluids' apparently - and their weapon.

Using their ability to change shape they have taken the places of several locals, including the Duke of Forgill himself (John Woodnut), his large bared servant Caber (Robert Russell) and Sister Lamont (Lillias Walker), a local nurse with a view to taking over the world, transforming it into a suitable environment for their fellow Zygons to settle as it turns out the Zygon's home world has been destroyed.

The Doctor eventually gets on board their ship, releases the human prisoners and blows it up. Broton, the chief Zygon, disguised as the Duke is planning to have the Skarasen attack an energy conference on the Thames, killing various big wigs and demonstrating their power to the world. Demands will follow.

The Doctor & UNIT track Broton to the conference where they shot him dead and the Doctor feeds the Skarasen its homing device, thus saving the world and sending the Skarasen back to Loch Ness, the only home it has ever known.

There's some great moments in this story. The cliffhanger to episode one where Sarah is on the phone to the Doctor from the hospital where Harry is injured. In mid-conversation Sarah is attacked by a Zygon and screams. It's one of the series all time great cliffhangers.

Then there's the Zygon-Harry's attack on Sarah in the barn and its subsequent death, which is quite chilling and tone wise very different to the Letts-Dicks era.

UNIT are quite effective in this story to. They look military for once, something Douglas Camfield the director always seems to be able to do effectively. When they're out in the woods hunting down the Zygon that killed Angus the Landlord the whole thing feels right. Lillias Walker is also spectacularly sinister as the Zygon-Sister Lamont. There's something chilling about her appearance in the neat, pressed nurses uniform and she's got a mean stare on her.

The model work for the Zygon spaceship is quite magnificent, especially its destruction.

We say farewell to Harry Sullivan at the end of this story as the production team, quite rightly, realised that with a younger actor as the Doctor Ian Marter was not being used effectively, which is a shame because I quite like Harry.

What more can I say...except get it out on DVD and everyone else should buy a copy and give one to your friends. This is Doctor Who at its best, edging away from the comfortable Letts-Dicks era and into something much darker.

A universe of terrors awaits.

Update, after re-watching on DVD.

I think I stick to most of the above. I'd add that John Levene puts in one of his best Benton performances in this story I think. There's a couple of quibbles: how come the Doctor is suddenly an expert in organic crystallography & Zygon technology, why doesn't Broton realise the Doctor's freed the Duke & most importantly why does Sarah almost get the Doctor killed lurking about in the doorway when the Doctor's told her to go & get the Brigadier?

And we won't see the Brigadier for a while either, which is a shame too, but the Doctor begrudgingly helping makes more sense to me than the Third Doctor's name dropping establishment figure.

I still love Tom Baker. I still can't watch his era with anything approaching objectivity but you know I'm not going to apologise for that. Tom Baker's Doctor is the reason I'm a Doctor Who fan & when I'm depressed or tired it's Tom Baker's era that I reach for to cheer me up. So if you don't like the Tom Baker era or you don't think Tom is 'Doctor-ish' then we'll have to agree to disagree. Even though you're clearly wrong.

There's also some lovely picture cards of Tom's companions, although it's sad to realise how many of them have passed away.

The Terror of the Zygons DVD is the vanilla release but does the job. There's also a DVD with a new c.30 minute interview with Tom Baker, which is nice & is quite lovely about us fans and the audio of 'Genesis of the Daleks' (with Tom's narration). I've still got a battered old cassette version of this somewhere, which I can't listen to, so it is nice to have a replacement.

So buy it if you've got the money to spare or you're an insane completist. Like me.