CLASSIC DOCTOR WHO ON BRITBOX – Planet of Evil 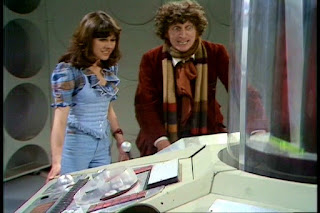 On 26th December 2019, 627 pieces of Classic Doctor Who content were made available to Britbox subscribers. Every Sunday in 2020, our Doctor Who expert, Tony Cross, looks back at some of the classic stories. Here is the Fourth Doctor adventure Planet of Evil...

So Season 13 continues with another fine story, although not quite up to the standards of 'Terror the Zygons'.

The TARDIS picks up a distress call and the Doctor and Sarah arrive on a planet that turns out to be Zeta Minor on the edge of the known Universe. A Morestran geological expedition led by Professor Sorenson (Frederick Jaeger) has been investigating minerals on the planet to use as a source of energy for their dying sun. Unfortunately something has killed off pretty much the whole expedition, except Sorenson.

The Doctor and Sarah arrive just as a military mission from Morestra, led by Salamar (Prentis Hancock) and Vashinsky (Ewan Solon) who are a sort of young, shouty chap and old gentleman combination, does.

This sets them up for the blame as is usual in Doctor Who. How many times does the Doctor's first encounter with other characters in a story come as he is bending over a dead body? It's lucky no one has shot him on sight before.

Anyway the Doctor and Sarah are initially suspected, then unsuspected when it turns out that the creatures are anti-matter beasties. However after the Doctor drops down a large hole like the Alice following the White Rabbit and talks to whatever it is that is in charge a deal is struck. The Morestrans can leave Zeta Minor if they don't take any of the Professor's minerals with them.

This obviously doesn't go down well with our Professor Sorenson, who as is often the case with scientists in Doctor Who thinks his theory - or his reputation - is so important that he loses sight of the danger he and others are in.

It turns out that the Professor has been infected with anti-quark radiation and is in danger of becoming a monster. The Professor thought he had it all under control, having created a medical solution but alas it is not to be. Sorenson goes off on a monstrous rampage. He is, the Doctor explains, 'antiman'.

By this point Salamar has become even more shouty, goes right off at the deep end and goes hunting for Sorenson himself with a neutron something or other. I have to say this story does contain a fantastic amount of pseudo-scientific gobbledygook, which must have been a right mouthful for the cast. Well mainly for Tom Baker who has to say most of it. Anyway Salamar's decision is a bad one. He dies but not before making antiman Sorenson more dangerous.

The Doctor zaps the real Sorenson with a gun - yes, the Doctor uses a gun in this story and gives Salamar a rather impressive right hook - takes him to Zeta Minor, drops him and his samples down the big, deep hole.

Sorenson is returned, unharmed but forgetful. So the Doctor drops a subtle hint that he has abandoned his line of research into anti-matter and is now working on using the kinetic force of planetary move...SEE...meant as a power source. The End.

It's not bad. The jungle set for the surface of Zeta Minor is impressive. In fact it is far more impressive than the rather mediocre sets for the interior of the Morestran spaceship, which is bland. I'm glad to see the Morestrans are another one of those races who put whacking great signs up on doors so that you know what's in each room, just in case you need say...the FORCE FIELD STORAGE ROOM.

Tom Baker and Liz Sladen are great in this. Liz gets to do another 'oh no the Doctor's dead' scene, which she's great at but do we really need one every story.

The thing about Tom Baker's Doctor is that the combination of the voice, the big eyes and the clearly bonkers brain makes him seem like an alien. Tom's Doctor is almost the only Doctor whose reactions and responses are written (and played) to seem non-human. It might only be a line here or there but it is enough to make him strange, even if it is in BBC tea-time sort of a way.

Frederick Jaeger's performance is lovely to. The way he plays Sorenson as man in shock or distracted by the weight of what's on his mind before the reveal that he's infected (and has known about it for some time) is wonderful. He isn't a villain really, he's just another in a long line of people in Doctor Who that thinks the end justifies the means.

Ewan Solon does a nice job giving Vishinsky a bit of spirit and backbone but a round of applause for Prentis Hancock's totally hamtastic performance as Salamar. His increasing madness is reflected by shouting even more than he did initially. Without Prentis's top grade hammery the Morestran's would be notorious for being one of the dullest races in Doctor Who history...with the possible exception of the Xerons, which is odd because one of them is the mighty Michael Wisher.

Actually there is a bizarre throwaway in the first episode when Sarah steps out of the TARDIS into the Morestran spaceship and has trouble breathing. Salamar says something about her being an 'oxygen' breather gets the air changed and nothing is said about it again. They don't have problems breathing this new Earth-type air. It's just a bit odd.

Anyway it's a solid Tom Baker Doctor Who and that makes it pretty good I say.