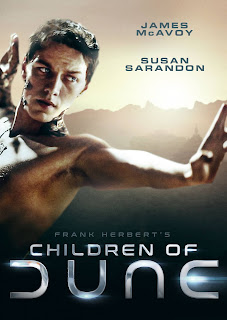 Ren Zelen checks to see if there's still any Spice left in the TV mini-series Children of Dune (2003) out now on DVD and Blu-ray thanks to Signature Entertainment...

With anticipation high among sci-fi and movie fans for Denis Villeneuve’s upcoming film adaptation of Frank Herbert’s milestone sci-fi novel ‘Dune’, Signature Entertainment is releasing a 3-part TV miniseries of a sequel, Children of Dune, on Amazon Prime. This TV adaptation was written by John Harrison and is based on the second and third novels of Herbert’s ‘Dune Chronicles’- ‘Dune Messiah’ and ‘Children of Dune’, and is itself a follow up to a 2000 TV series of Dune, (which I admit, I have not seen).

The action begins twelve years after the events of Dune. Arrakis, the desert planet, has been freed by Paul Muad’Dib (Alec Newman) from the evil House Harkonnen. The intervening years have seen a brutal war waged by Muad’Dib’s Fremen crusaders as they conquer the universe for their leader. Muad’Dib has become a reluctant messiah, one who is regretting the death and destruction that his galaxy-wide jihad has unleashed. Meanwhile, the House Corrino, family of the former Padishah Emperor Shaddam IV, lives in exile on the planet Salusa Secundus.

While the Padishah Emperor’s youngest daughter Irulan (Julie Cox) has been joined to Paul Muad’Dib Atredies in a political marriage of convenience, his oldest daughter Wensicia (Susan Sarandon), is plotting her revenge. Arrakis still maintains its monopoly on the production and distribution of Spice, the precious commodity that prolongs life, develops mental faculties, and facilitates interstellar space travel for the Spacing Guild. It is this situation that Princess Wensicia is intent on disrupting.

Back on Arakkis, Paul has given over his dominion to Alia (Daniela Amavia) his now adult sister, who fiercely protects his mythos and rules his empire with an iron fist. Meanwhile, his Fremen consort Chani is soon due to give birth to the twins which will become Paul’s heirs.

In the latter episodes the action and intrigue notches up as Paul and Chani’s children - Leto II (James McAvoy) and Ghanima (Jessica Brooks) take centre stage (here they are portrayed as teenagers rather than children, one of several changes Harrison made in scripting this adaptation). 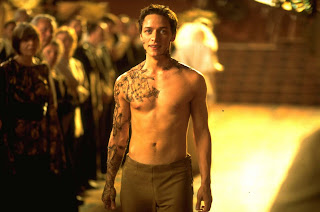 Though Greg Yaitanes replaced John Harrison as director, Harrison wrote both miniseries, which allows the dramatic continuity to be maintained from his first Dune TV adaptation. Alec Newman, Barbora Kodetová, Julie Cox, and Ian McNeice all reprise their roles as Paul, Chani, Irulan, and the Baron Harkonnen, respectively.

However, there are changes in the cast - Alice Krige replaces Saskia Reeves as Lady Jessica and brings gravitas to the character as she matches wits with Princess Wensicia played by Susan Sarandon, who hams up her villainous role with glee. Adding to the confusion, Steven Berkoff replaces Uwe Ochsenknecht as Stilgar and Edward Atterton replaces James Watson as Duncan Idaho.

The brunt of the action ultimately depends on performances from a young James McAvoy as Leto II and Jessica Brooks as Ghanima, the Atreides twins. The youthfully handsome and charismatic McAvoy commands attention as easily as his character commands the sandworms. Daniele Amavia also deserves praise, giving a committed performance as the troubled adult Alia, slowly being driven mad by a bad Spice habit and the voices of the past.

Julie Cox as the patient and loyal Irulan offers a solid performance, while Alec Newman as Paul, appears rather humdrum for someone who is meant to be a compelling Messiah. Mercifully, there are skilled actors that keep the drama afloat in contrast to some very lacklustre subsidiary performances. 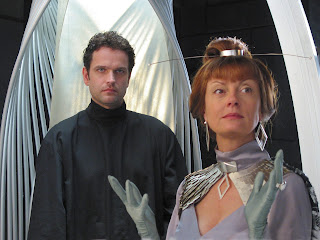 As TV series made in 2003 go, Children of Dune is ambitious. It boasts lush sets and costumes, digitally created sandworms and some dynamic action and special effects. The photography is gorgeous, bathing everything in a golden glow. The sets and production design are impressive. From splendid cities and magnificent palaces to vast sandscapes, it displays a grand sense of scale and the decision to shoot it in high definition pays dividends.

Children of Dune spins a complicated tale of revenge and religious fanaticism and those not already familiar with the complexities of Herbert’s novels may become impatient with the convoluted galactic political plotting, intrigue, and interrelationships. Those who have read the ‘Dune’ novels are probably more likely to appreciate and understand all the intricacies of the plot and not be put off by the somewhat slow pacing and portentous dialogue.

As someone who has a soft spot for David Lynch’s spurned Dune film (and who owns the 3-hour version of it on DVD) I personally missed some of the unique elements he brought to the filming of Herbert’s epic tale. Lynch imbues his movies with an uncanny, dreamlike quality, but one that is inevitably laced with a sense of menace. It makes for a hypnotic experience which kept me glued to his cinematic version (despite the obvious attempts made by the studio to cut its unwieldy running time). The array of actors which he managed to assemble was also impressive and all supported his unsettling, yet lavish, vision.

Lynch’s Dune universe was familiar, but also otherworldly, and although Children of Dune makes strides towards capturing the ambitious scope of Lynch's production, it comes across with little of its mysteriousness and wonder. The originality and strangeness of Arakkis and the Fremen tribes is lost – here they simply resemble desert dwellers involved in something similar to a tragically fanatical middle eastern conflict.

This aspect is aided by a middle eastern-influenced soundtrack composed by Brian Tyler, pleasant enough in itself to have been reused in many other trailers and productions. This drift towards the commonplace may serve in not alienating those unfamiliar with the fantastical elements of Herbert’s novels, but it also does a disservice to his epic world-building.

However, nothing will dint the popularity of the DUNE universe that Frank Herbert created, and which has spawned a movie, two miniseries and three video games so far, with Denis Villeneuve’s movie adaptation soon to be released. It will undoubtedly continue to inspire and influence many sci-fi epics and space operas to come.